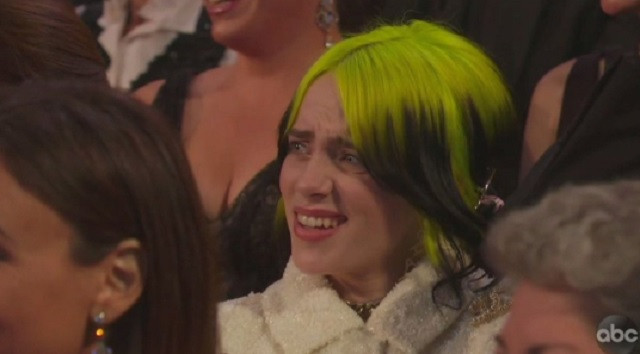 ‘OK Boomer’ has become one of the funniest phrases in the English language over the past year or so and now we’ve also got the perfect meme to accompany is after Billie Eilish reacted to all the nonsense that was going on on stage during this year’s Oscar ceremony.

The camera first panned to Billie’s reaction when Maya Rudoph and Kristen Wiig did some weird impromptu singing on stage and she just had absolutely no idea what was going on or why people were laughing. In fairness, neither do I really and I imagine it was probably fairly similar from most people in the audience – Billie’s just obviously much younger than most of them and massively in the spotlight at the moment after the success of her debut album, so that makes her reaction way funnier.

Anyway, this was a theme that continued throughout the show as she made all kinds of faces to all kinds of different people, including Eminem:

They keep cutting to Billie Eilish for her reaction and it continues to be: Who are these old people and what are they talking about? pic.twitter.com/LyrJ2r5hSY

What a reaction to Eminem from Billie Eilish. #Oscars pic.twitter.com/h0eS0ZgflR

Lol. I guess Billie has a bit to learn about attending Hollywood awards ceremonies because she clearly didn’t know that you’re gonna get completely rinsed if you make stupid faces. We’re OK with that though. OK Boomer even.

For more of the same, check out millennials complaining about age discrimination more than old people. Who would have thought it?