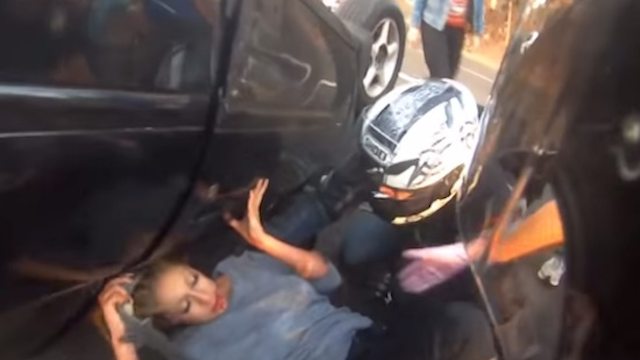 This is a pretty great video in that it shows that you can always depend on the kindness of strangers and the right person being at the right place at the right time. It also dispels the stereotype that all bikers are assholes.

It happened one day a couple of weeks ago when our protagonist was riding his motorbike home on the San Diego 163 northbound when he saw that a car had flipped over and there was a woman trapped inside. Instead of biking off like most people probably would have done, he decided to pull over and see if he could help.

Turns out he could as nobody there had a knife which was necessary to cut the girl’s seat belt off so she could get out. Without even breaking a sweat he pulls one out and cuts it off like he’s been doing it all his life. Hero. The only thing that would have made it better would have been if he rode off into the sunset afterwards without a word.