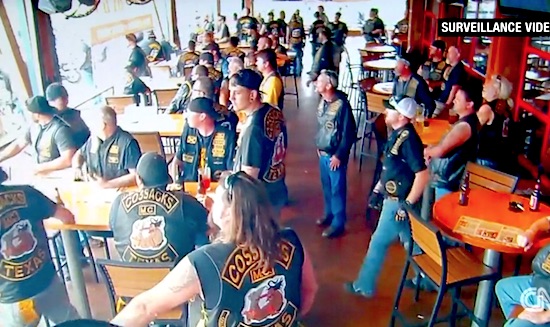 This is completely mental.

Police have released this surveillance footage of a shootout between cops and bikers in the Twin Peaks restaurant in Waco, Texas. It resulted in 9 people losing their lives and 177 people getting arrested back in May.

Some proper Sons of Anarchy type shit right there. Actually made me miss that show a little bit watching this. Just non-stop murders, kidnaps, explosions, high speed chases, evading police. It’s one thing watching it in a TV show though, quite another seeing a wild wild west style shootout going down in real life. Good thing seemingly every single person in this video owns a gun though, right? Wouldn’t want anyone feeling left out.

For more insane cop shootouts, check out this video of a police chopper chasing a gangster through the favelas of Rio De Janeiro. Intense stuff.