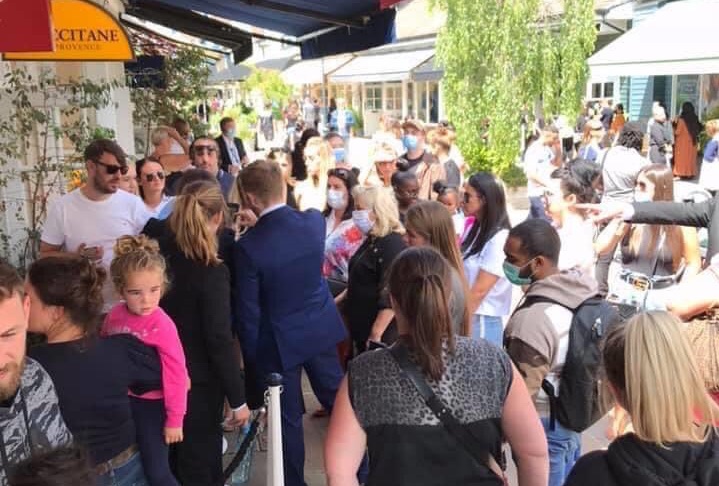 Social distancing was not upheld.

A whole bunch of high street shops re-opened yesterday and the narrative was all based around how it was crazy that so many people were desperate to go to Primark after it had been shut for three months because well, why would anyone wanna shop at Primark, right?

I did actually say that it might have been because low income families desperately required cheap clothes and they didn’t do a delivery service, but I gotta admit that even I was surprised by how many people seemed desperate to get back in there. What’s even more surprising though is how many people flooded to low cost retail park Bicester Village to pick up some new designer clothes for a budget price yesterday – this is way grosser than people queuing up to get into Primark because it  looks kinda like a mosh pit up in there.

Open this shit up! People on Twitter obviously weren’t very happy about the lack of social distancing and again that people didn’t really feel like they had anything better to do except descend on a retail park and go absolutely crazy:

So the media will report people going to Primark to buy clothing that is affordable but WILL NOT show images of those that flocked to Bicester village today in their thousands because they were shopping in “upscale” stores.
I hate this capitalist society. pic.twitter.com/jaz8OR00kP

Don’t the people at Bicester Village know they can get Ralph Lauren polo’s online without having to queue? pic.twitter.com/A4MeYSL5Jk

This is Bicester village but everyone’s sneering about people going to primark 🙄🙄🙄 pic.twitter.com/20qaWzDa1s

Bicester Village today.. just re-open the pubs and be done with this nonsense pic.twitter.com/soQP0mYp5p

So I can’t go nass but I can go Bicester village. Right. pic.twitter.com/oqBROAL0Jr

So I can’t hug my friends ,but these people in Bicester Village can cue for hours to get a new Gucci bag? pic.twitter.com/2GVR586m0U

I mean I can’t really argue with a lot of that. Still absolutely amazed that people want to head down to the shops in these conditions, but a lot of those people are right – why not just open everything if people are going to be like this? It’s gonna go on whenever it goes down, might as well get it out of the way, right?  What’s the worst that can happen? (Don’t answer that)

For more of the same, did you hear that Greggs is re-opening on Thursday? Here’s everything that’s on the menu.