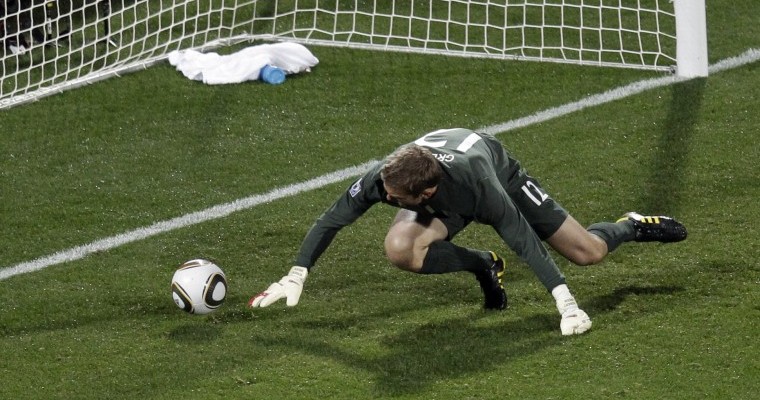 We covered the goals pretty comprehensively on Sick Chirpse at the end of 2012 but we carelessly neglected the guys between the sticks. These saves are completely outrageous.

Rob Green is not in this video.

We covered the goals pretty comprehensively on Sick Chirpse at the end of 2012 – with a video of the Top 100 in the world, and then the Top 20 in the Brasileirao, and we even gave you all of Messi’s 86 record-breakers in December (before he went on to get 5 more) – but we carelessly neglected the guys between the sticks.

Some of these saves are truly incredible. I mean, it launches straight into a peach from Casillas and that De Gea save from Mata’s free kick (that you’ll remember was the cherry on the top of a game that had seen Chelsea lead 3-0 before a United comeback left all “6 points” resting on the finger-tips of the goalkeeper in the dying seconds) and it doesn’t slow down for all 5 minutes.

David De Gea actually features more than anyone else in this video (except maybe Joe Hart) which isn’t too surprising because he pulls off miraculous saves on a weekly basis, but he would also feature more than most in a compilation of goalkeepers being terrible at dealing with crosses and set-pieces, hence why the debate still roars on as to whether he’s actually worth the risk. He’s lucky that a compilation of goalkeepers not coming for crosses would never get made by anyone ever so his legacy (on the internet at least) will always be his acrobatic heroics.

Obviously you’ll all have your personal favourites which you can express in the comments but my maddest props go to Victor Valdes on 0:28 for that insane claw off Guiseppe Rossi’s head when they’re both practically inside the goal themselves, and Michael Landreau for that outrageous triple save at 3:47. I know the finishing by the Marseille players was awful, but the sickhead saved 3 shots in 2 seconds. To be honest, about 90% of these saves are completely ridiculous so picking the best isn’t easy.

Suspicious omissions that spring to mind include Michel Vorm, Simon Mignolet, Manuel Neuer, Tim Krul, Diego Alves and Petr Cech in the FA Cup Final, but whatever. I’m not complaining, but…you know. It could have been even better is all I’m saying.

Anyway, here’s the video. SclicTV, whoever you are, you did a good job. Maybe go easy on the Pirates of the Carribean soundtrack next time, though.

And here’s Petr Cech’s cup-winning save that I’ve just decided was the single best save of the year.

â˜›   Is This The Greatest Goalkeeper Goal Ever?