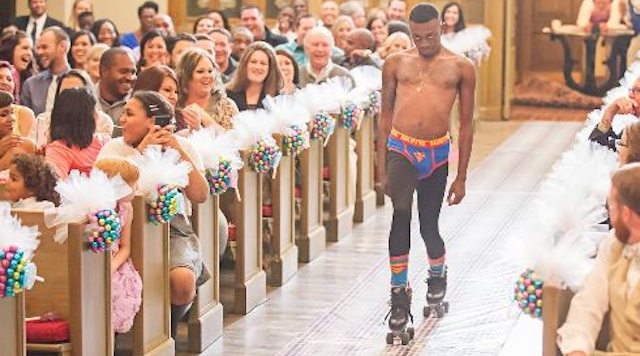 You just know this guy is going to sort it all out.

If you’re wondering how to make your wedding day memorable, then look no further than this for a great idea.

You’re just about to put the ring on your bride when you realise that the best man can’t find it and neither can anyone else. Then, out of nowhere a half naked black guy on roller skates rocks up and drops it off and rolls on out again, saving your bacon and also creating one of the defining wedding moments in history, especially for all the hipsters at this wedding who you just know absolutely loved it. Just look at that beard count – you would have thought this would have been going down in East London or something.

A guest of the wedding described what happened, which is pretty much how I described it but it’s more authentic to include direct quotes:

A friend of mine had his wedding today. The best man is asked for the rings, the groom holds his hand out. Everyone checks pockets…and no one has the rings.

Then… this guy rolls in

I don’t know who this guy is but apparently he’s a big star on the DQ4E YouTube channel and is becoming somewhat of a minor internet celebrity. I’ll take their word for that but I can definitely see him blowing up in the coming months if he keeps rocking stunts as dumb as this. Fair play and remember kids – say no to crack but say yes to roller skating.