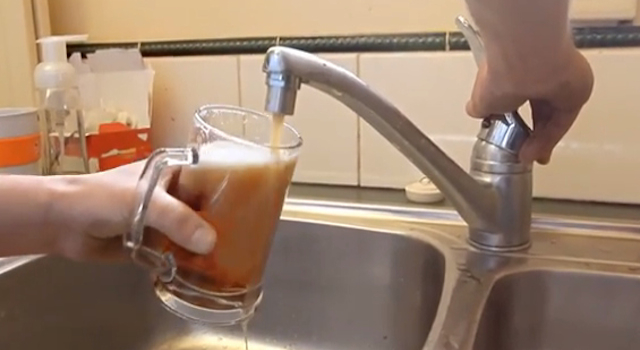 This could be the best prank in the history of pranks – at least for the guy getting pranked.

This has got to be one of the most epic pranks ever, and a prank that if you got got with that you would probably actually enjoy. At least for a time. I mean as much as anyone likes drinking beer, you’ve gotta wash sometimes and eventually you’re probably going to get too wasted to enjoy it anymore.

Basically, these guys waited until their buddy Russ was going out and then immediately went to work pranking him by replacing every single tap in his house with a keg of beer. It looked like tough work – not to mention expensive, which makes me think it’s probably a viral advert for the beer featured in the prank, which is a New Zealand brew called Tui – but they eventually managed to do it. And they all loved it when they went into his house, turned on the taps and poured out a glass of that delicious amber ale.

Following this they installed a bunch of cameras around the house to catch the moment when Russ returned. And what did Russ do when he found out that all his taps now flowed with beer instead of water? Go crazy and get really angry? No way – he called up all his buddies and decided to have a party. Yeah dude, that’s what I’m talking about. Pretty much perfect.