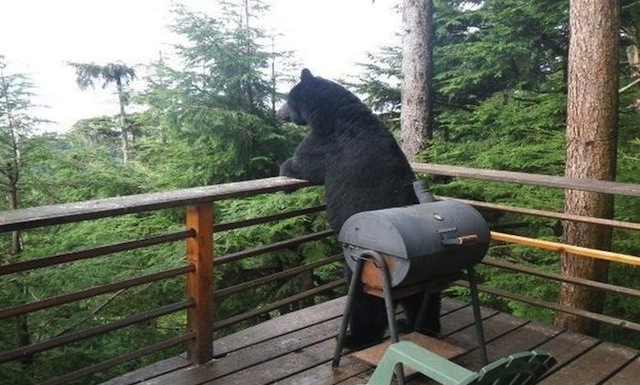 This photo of a bear contemplating its life has been doing the rounds recently. Is the bear depressed? Is it just taking some time out to chill and take in some views?

This photo of a bear contemplating its life has been doing the rounds recently. Is the bear depressed? Is it just taking some time out to chill and take in some views? It’s hard to tell. But it made me think about all the spectacular bear feats we’ve posted over the years, all the impressive things we’ve seen that bears are capable of, and how essentially bears don’t get the props they deserve for their intelligence.

It all began in 2010, when someone uploaded the earliest recorded bear viral video known to man. The whole world laughed, not considering that perhaps this was a bit of a condescending reaction to a humongous beast that was trying to be polite:

Or was the bear just playing nice? Returning greetings from humans like shit is all cool between us. Like we didn’t enslave his ancestors into the circus life and hunt his Grizzly cousins over in Canada. We should have clocked that something was a foot at this point.

Still, a couple years went by and we posted a video featuring one of the most impressive bears anyone had ever seen; one that could do forward rolls, the hula hoop and play the trumpet on command.  It even knew how to set up a chair on the ground and then sit comfortably in it:

Pretty spectacular right? The whole world laughed again. Bears — nothing but circus freaks and wild game there for our amusement. Big loveable oafs who we could control, manipulate and never have to worry about. Until this happened…