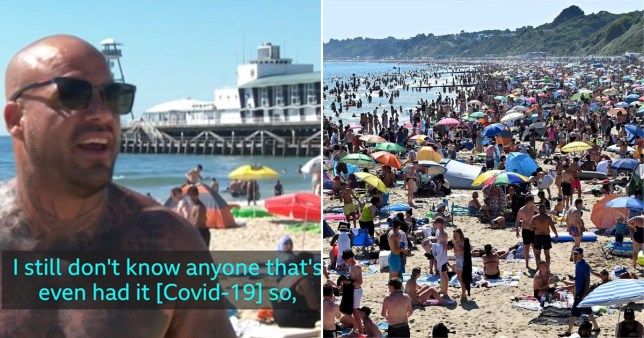 It seemed like most people in the country were pretty appalled yesterday when swathes of people headed down to Bournemouth beach and others all around the country and they’re probably going to be even more annoyed when they see the interview that the bonehead in the video below gave.

The BBC interviewed a few people on Bournemouth beach and this idiot really stood out:

We’re going to have a couple of drinks, enjoying the sun. It’s the closest we’re gonna get to a holiday this year, so got to enjoy it really.

I still don’t know anyone that’s even had it [Covid-19] so in my eyes, it doesn’t really matter.

But yeah, as long as everyone’s safe, but it’s getting a bit hectic down here now isn’t it?

It’s probably going to cause a second wave, people are just doing what they want aren’t they?

I mean that isn’t really the point and I think he’s kind of ignoring all the information we have about spreading the virus BUT pretty much everyone in the country seems to be going out to parks and going round people’s houses now so I can’t really condemn him too much when so many other people are doing it as well. Also well aware that journalists always find the dumbest people possible to interview so they get the dumbest interviews, but even so everyone on that beach is in the same boat and it’s very representative of the general public right now so that’s OK. Good thing we don’t have to rely on the common sense of the public to prevent a second wave or anything.

For more of the same, check out this woman who was shocked there were so many people at the beach but drove 1.5 hours herself. Moron.