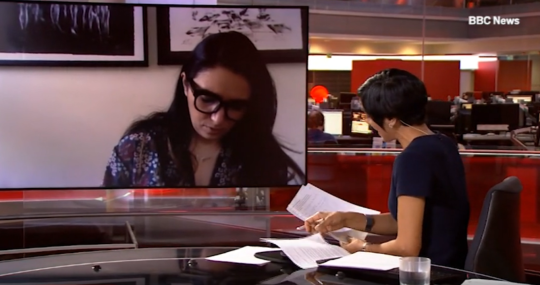 I think everyone probably knows about the inherent risks associated with producing live television, so we should probably give the guys a break that they manage to do it flawlessly most of the time, but when a major boo boo like this one happens you have to laugh about it really don’t you?

We’re joining BBC News here one where presenter Reeta Chakrabarti was discussing the situation regarding Piers Morgan and ‘Good Morning Britain’ when she failed to introduce talking head analyst, lawyer and activist Dr Shola Mos-Shogbamimu by her actual name because she couldn’t pronounce it properly. Then to make matters worse, the live feed cut to a different woman who failed to acknowledge her questions.

Take a look at the regrettable situation below:

Whoops. I suppose you can’t really blame Reeta for not knowing exactly what each of her guests looks like, but it’s still a pretty awkward and embarrassing error for the BBC, especially when discussing their main rival’s departure from his TV show. Although it’s also kind of funny that they’re barely giving the Piers Morgan story any respect by not even getting the right person on to be interviewed about it, even though I doubt it was deliberate. Oh well.