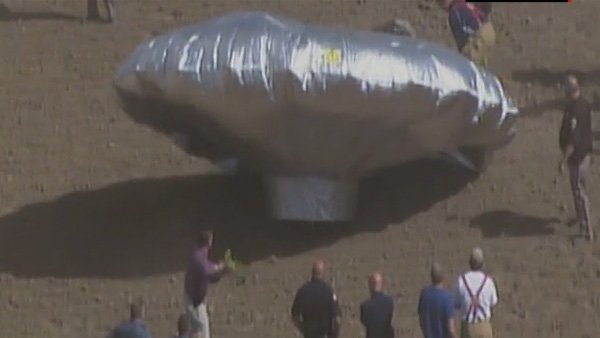 The kid snitched on his parents during a live interview.

The Colorado ‘Balloon Boy Hoax’ is something that would have gone insanely viral if it happened today, but was still a big deal 10 years ago.

Basically what happened is a 6-year-old became known as ‘Balloon Boy’ after being roped into an elaborate hoax by his parents, who told the world he’d floated away in a homemade helium weather balloon in 2009 when he had in fact been hiding in their attic.

They claimed the balloon took off from their yard and drifted for 90 minutes before landing near their home in Fort Collins, Colorado, but by then the whole world was captivated by the idea of this terrified 6-year-old boy floating through the sky as even the National Guard got involved.

Anyway, Falcon Heene, now 16, and his family were interviewed by Good Morning America this week to commemorate the 10 year anniversary of the event, and guess what? The dad is still denying the whole thing was a hoax. Lol:

The “balloon boy” family speaks out ten years after the hoax captivated the nation. @TJHolmes sits down with them for an exclusive interview. https://t.co/RrpCy5WDyx pic.twitter.com/lTbv6v2OcM

I don’t know how he can still deny it after the kid ADMITTED they “did it for show” in the original interview after the whole thing happened, but there you go.

Whatever the case, the whole fiasco is just hilarious to look back on a decade later. What a story! And made even better by the fact the dad is still pissed off about everyone calling him a liar.

Oh yeah, the kids are now in a heavy metal band which is completely terrible. Good luck to them though:

For more internet classics, check out the infamous ‘How Can She Slap?’ video HERE,  which we revisited 10+ years later. Gotta love the internet.