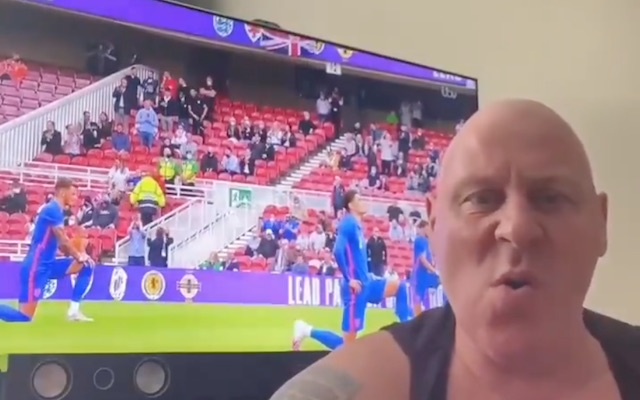 Footballers taking a knee to raise awareness about racism following the murder of George Floyd has been a fixture of matches for almost a year now, so it’s no real surprise that it’s started to garner somewhat of a backlash after people started saying that it was irrelevant and no longer had any meaning because it had been going on so long. See also Marxist overtones of the Black Lives Matter movement.

Anyway, It was well documented during the last two England matches that the player taking the knee beforehand were roundly booed by fans in the Riverside stadium up in Middlesborough which is a bit embarrassing, but absolutely nothing on the guy in the video below. For some reason, he’s decided that he hates players taking the knee so much that he’s going to film himself booing at the television screen every time they do it and then upload said video to the internet:

We all definitely need to do our own ones of these at every game and post it on Twitter with the #BooTheKnee pic.twitter.com/8e4RN8kD9w

Lol. Best bit has to be when he decides to take his glasses off halfway through – ‘now do it once more without your glasses, but with more feeling’ – but I feel like the whole video is deep humiliating for the guy, however you feel about taking the knee. Just kinda sums up Brexit/Flag Twitter doesn’t it that they have to film themselves doing something so pathetic yet are actually majorly proud about it themselves. Really weird flex but sadly one that seems to be dominant in this country at the moment.

For more of the same, check out these Chelsea fans singing about refusing to take the knee as long ago as last summer. Seems like it’s always been an issue.