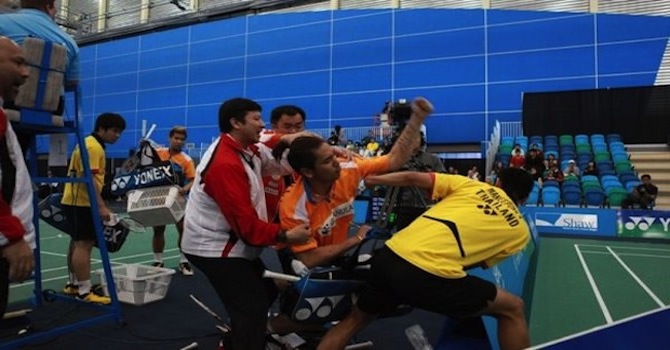 During the final of the badminton men’s doubles at the Canadian Open, two former partners ended up having a full on scrap before the match was abandoned.

There’s certain sports you associate with violence. You’d rarely see a game of ice hockey go the distance without two meat heads getting down to some fisticuffs. Even with players more concerned about the colour of their boots or how their hair is looking, modern football sees its fair share of pretty vicious fights too. I can’t imagine there are many out there that would have badminton high on the list of sports you’re most likely to see a fight in but things may be about to change. The video below shows two Thai badminton players getting into a bit of a scuffle during the men’s doubles final at the Canadian Open.

There seems to be a bit of a back story to this as Bodin Issara and Maneepong Jongjit (the two men ‘slugging’ it out) were actually doubles partners during last year’s Olympics. It would appear at the change of ends after a game, the two exchange words (probably one letting the other know how he prefers the way his new partner strokes the shuttlecock) and then it all kicks off.

Issara and his partner Vilailak Pakkawat were given the black card (disqualification) and the win was awarded to Jongjit and his partner Nipitphon Puangpuapech. Though he lost the match, Bodin goes down in my book as a bit of a G as he’s the one chasing his former partner around, hurling a chair at him and landing a few punches while Maneepong Jongjit tries to run away like a little girl.

Should Disabled Fighters Be Allowed To Compete In MMA?