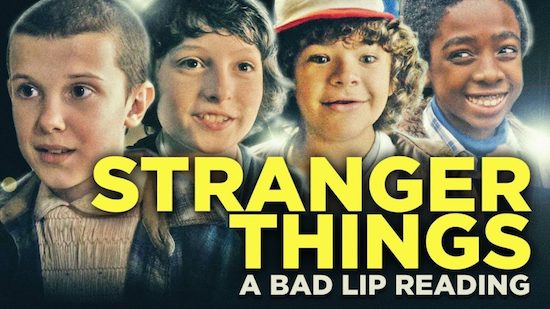 Stranger Things is one of the most popular TV shows in recent times, so it only makes sense that it would get the Bad Lip Reading treatment. Probably the only thing that’s weird about it is that it’s taken so long.

Anyway, this version of Stranger Things has been reimagined as a cheesy 80s sitcom similar to The Wonder Years, where the most important things are practicing for the musical play, comparing your music taste with the local sheriff and kissing a girl for the first time. Pretty much your standard coming of ages show, only with people saying completely dumb and ridiculous things instead of the norm.

Obviously Steve gets all the best lines, perfect:

Yeah, well worth the wait considering we got 18 minutes of it and a full storyline (kinda) rather than the usual five minute clip. Wanna see another episode for it to be honest, hopefully they’ll develop it into some kind of series.

For more of the same, here’s a fan theory about it that will blow your mind. Seriously.