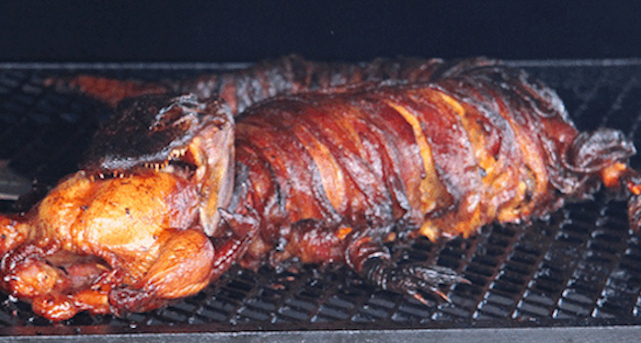 Well, as far as crazy food combinations goes this might just be the craziest yet.

We’re big fans of crazy food combinations here at Sick Chirpse – even if we decline from eating them most of the time – but this is one combination we would never have dreamt of ever existing. Mainly because we don’t really ever eat alligator over here of course, but the whole idea behind it is still pretty nuts. It also seems kind of impractical to eat, but hey so do most of the crazy concoctions.

The dish was the idea of some Australian guy called Alix McAlpine, who we’re assuming decided to catch an alligator, kill it, wrap it in bacon, stick a chicken in its mouth and then BBQ the whole thing. Australians huh, some crazy shit goes on in their minds for sure by the looks of things.

And hey, you can’t say that doesn’t look delicious even if you’ve never had alligator before (for the record it’s kind of like fish crossed with chicken so sticking a chicken on top of it probably works really well).