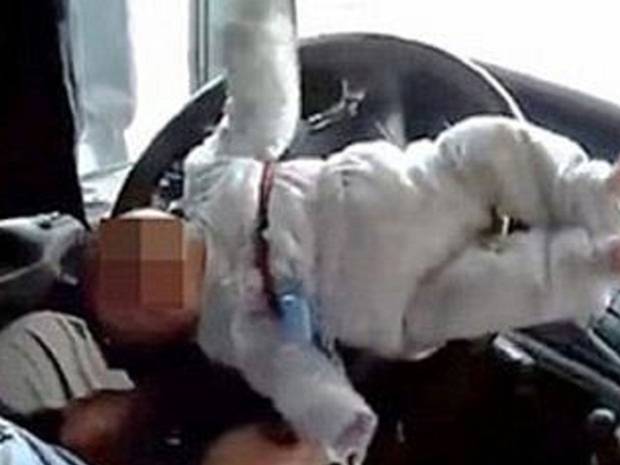 Yesterday we had some asshole who liked to beat up dogs for the fun of it, today we’ve got some absolutely terrible parents who think it’s a good idea to tape their one year old son to the steering wheel of their car and then laugh at him being spun upside down as they’re driving it. If they keep going this way then their kid is probably going to end up as retarded as they both are.

The video was uploaded in Taiwan and soon went viral there and in China, with most viewers condemning the parents for being absolute morons. Wang Wei-Jun, the director of the Taiwanese Committee for the Improvement of Children’s Rights made the following (useful) remarks:

What the video shows does not seem as if it is intentional abuse of the child, although I think it’s fair to say that the parents are a bad example for others and that the activity is certainly dangerous.

Well yeah exactly. The original video has been removed but hopefully these parents can be tracked down and have something done to them because there’s no way they’re going to raise this baby right if they’re doing stuff like this to him after one month of him being alive.