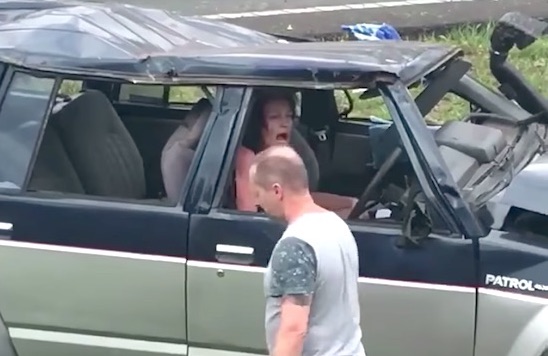 Not the best course of action.

If you’re gonna cause a car crash and smash up your and a bunch of other people’s vehicles, then there are probably better ways to deal with the aftermath then the way this woman deals with it in the video below.

We’re over in Australia and I’m not entirely sure how the accident happened or what even went down, but her car is severely messed up and it appears like she’s trapped in it. Instead of trying to get out or being helpful/useful though, she instead decides to sit in it screaming and shouting and swearing at everyone who walks past in an expletive heavy rant.

Take a look below, but if you’re in an office or something probably best to make sure you’re listening on headphones:

Yeah she’s not exactly creating the best impression there is she? Hopefully it wasn’t too long before someone came along and got her out of there, and hopefully sedated her too so she finally shut up. If you’ve screwed up there’s not point ranting and raving at people because that’s only gonna make it about a thousand times worse – maybe she’ll learn that now after it’s gone viral and everyone is calling her a dickhead because of her actions.

For more ranting, check out this weird rant from some guy who got pulled over by the police. Completely unprovoked and lame.