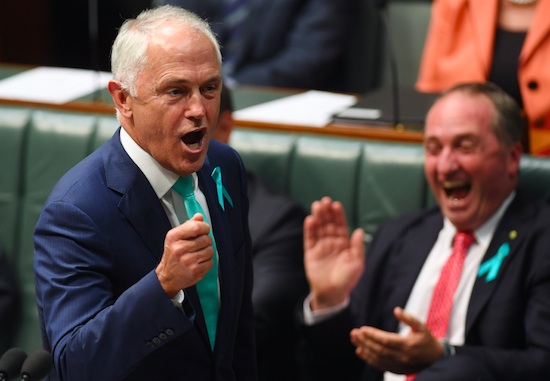 Politics is quite often a messy business, with rivals regularly goading and tearing into each other during their speeches. Australian Prime Minister Malcolm Turnbull just took this idea to the next level.

Turnbull was engaged in a debate with political rival Bill Shorten in federal parliament when he pretty much accused the dude of getting on his hands and knees under the tables to suck the dicks of billionaires to increase his social status. Ouch:

Lol. Apparently Shorten wasn’t too upset about it and just brushed it off, saying the following:

I have a mortgage, I live in Moonee Ponds and I’m proud of it.

I don’t think Australians have seen that sort of anger from Malcolm since his famous election night speech.

Kind of disappointed with that – would have been way better if Shorten had just straight up called him a dickhead or something rather than opting for the dignified response. Hopefully Turnbull will get it out of him next time though with his ongoing insults.

For more political shenanigans, check out these Ukrainian politicians beating the shit out of each other during a meeting of parliament. That’s one way to get shit done.