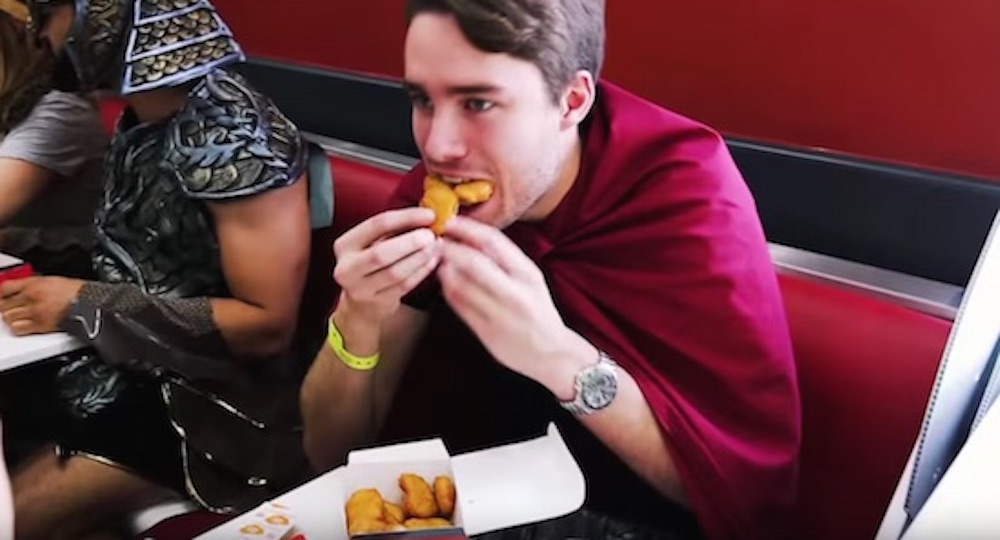 I want to start this off by saying that this video is really really stupid, but I just had to feature it because I love chicken nuggets so much that it would be an absolute dream to do something like this – other than the dressing up as vikings part because that’s just dumb.

Basically two comedians called Hamish and Andy from Down Under decided that it would be really funny to hit up their local Hungry Jack’s fast food restaurant with a bunch of their mates and try and eat them out of their entire supply of chicken nuggets. I’m not sure if they knew how many that was going to be beforehand, but anyone with a brain could probably have figured out that it was going to be a fair few, considering how many nuggets are probably sold at these kinds of places every day.

Needless to say, the challenge didn’t go as well as expected. Would definitely have been better without the whole viking theme too.

I’m not really sure what happened at the end there – did they just order those 500 extra nuggets and not eat them? Either way, even if they only ate 4200 nuggets between them that’s a solid 60 each which is a pretty respectable effort. As much as I love chicken nuggets I don’t think I would ever be able to eat anywhere near that much, although I’d be willing to give it a shot for something like this – just without the viking outfits.

However, when you think about it the new McDonald’s 48 nugget meal is almost as much as that, so people might be polishing off 60 nuggets just for fun fairly soon if things keep going the way they’ve been going.