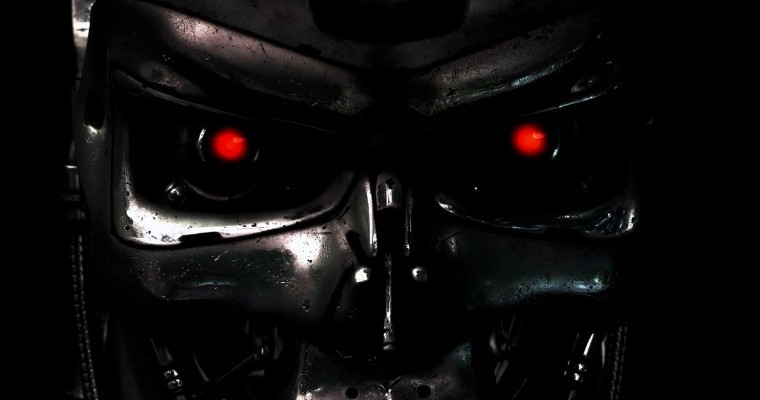 Audi’s new technology is going to take us a big step closer to that terrifying/blissful futuristic Wall-E world in which people get so fat and useless and dependent on technology that they can’t stand on their own two feet. Either that or it’ll be completely redundant.

Ok I may be exaggerating slightly, especially with the whole Terminator/Skynet/machine-uprising thing, but if I’d made the title “Audi Release A Really Dull Video To Showcase Their Impressive Self-Driving Technology” and used a shot of a stock Audi A7 as the featured image, none of you would have clicked the link.

Maybe this is the picture I should have used instead:

But yes, the video is dull and weird, mostly because there’s no music or barely any sound at all and it all happens really slowly and it’s really contrived and the whole thing just has a strange vibe to it. It’s like it’s happening in a city that has been overrun by aliens who have wiped our personalities and emotions and we’re not even aware of our own existence. Maybe I’m getting a little more spooked by it than I should because my iTunes just shuffled me up some Burial. Still, it’s really strange. Audi, your video’s strange. Get it together.

But it’s worth posting because there are some interesting ideas that it raises that I would like to run my mouth off about. Proverbial mouth. I’m not saying this aloud.

When Tourist sent me this video because he knows I’m into cars I have to say I wasn’t expecting the technology to be this good. I mean, I’m gonna give Audi the benefit of the doubt that this is an accurate representation of what would actually happen in real-life. So, if that’s the case, well done Audi. That’s impressive.

But once I got past the cool ghost driving, perfect judging of distances and really satisfying way the lights shut off at 2:20, I didn’t like it. There are several reasons why I sit back and get the feeling that this is a bad thing. In the most extreme scenario, it’s because of that Wall-E picture. I’ll come to Wall-E later though because there are also some more pressing problems with this thing, which could end up rendering it completely useless.

Firstly, Audi could hardly have picked an easier way to park a car, short of swinging it around a fountain in the middle of a gravel drive of a stately home. Alright, it can drive itself round a corner and back itself into a gap between two cars that have been parked considerately, but what happens when it’s gotta wind up a 4-storey Asda lot, around high curbs, pillars and shopping trolleys, and squeeze it into a gap between a selfish prick’s over-hanging pick-up truck and a distracted mother’s terribly positioned BMX X5?

I’m not saying the car couldn’t do it – the technology may be able to handle that. But the crucial factor is trust. Would you trust the car to handle it? It seems to me like a HUGE amount of faith in the technology is required from the user. It’s summed up perfectly at about 0:49 in the video. She walks off, but just before she leaves it completely, she glances back, because in the back of her mind she’s worried it’s going to completely fail. (I don’t actually know why she, as an actor in an advert for the technology, glances back. It doesn’t fill you with confidence does it?) If that was me I would not be able to walk away and leave my £40k car to go and park itself. I’d probably go and follow it, walking behind it at 1mph, wincing as it crept towards another car and then marvelling as it steered away from it, and then when it finally crawled into a space and turned off, I’d step back, genuinely impressed, and think, “Cheers Audi”. And then I’d realise I was 10 minutes late for wherever I was supposed to be and I’d start running out of the car park thinking, “Cheers Audi”. Only, the second time it would be a lot more sarcastic.

For this technology to become the norm, it would have to never fail. EVER. If on just ONE occasion someone came back to the car park to find that their car had been trying to drive through a wall for an hour and a half while only succeeding in removing its paint, puncturing its tyres and killing its battery, no one would be able to get anything done because they’d be spending their entire time at wherever they had had to drive to worried about whether their car had safely parked itself or not. Or, if you want the less melodramatic version, they’d just park the car themselves. Technology: redundant.

Here’s another video Audi made to showcase the technology:

Seems quite useful, right? Seems like this would actually be used all the time, because who likes driving in stop-start traffic on a rainy Monday night after a tough day at the office, right? But not quite, because you probably noticed the thing that I found strange and unnatural about this video.

0:30 – Adaptive cruise control engaged. Sit back, relax and… what, just sit there? Just sit there upright facing forward with your hand close to the steering wheel in case a drunk driver shunts you in the back and you have to swerve to avoid barging a school minibus into the oncoming lane? BULLSHIT. You’ll get your phone out, check Facebook, check Twitter, check Sick Chirpse, text your mates, play Temple Run. Maybe you’ll take your tie off. Hey, what the hell, take your shirt off, it’s been a long day. You know what? The traffic goes for miles, there must have been an accident, why not crunk the seat back a few notches and shut for eyes for a few seconds, I’m not gonna fall asl… *CLUNK* OH SHIT I’VE HIT SOMEONE.

â˜› You Could Just Let Your Dog Drive: Dogs Learning To Drive In New Zealand

It’s also worth pointing out that lickmyfart earned the top comment for the video with this pearl of wisdom:

Of the 27 people that thumbed up that comment, I’d be interested to find out how many simply enjoyed it for its satire, and how many had to come back 20 minutes later to thumb it up because they had had to beat themselves off there and then, such was the arousal generated by the sudden realisation that there would soon be a brand new and exciting situation in which to beat themselves off. Hopefully there weren’t many in the latter category, but those kinds of people exist, make no mistake. There’s no hiding from the fact that, if this technology takes over, at some point you’re going to be slowly overtaken on the M6 by a half-naked guy jerkin’ his gherkin. Thanks Audi.

Alternatively, if those problems don’t arise and the machines’ conquest of the puny humans goes smoothly, we will then have to deal with a much bigger problem in the shape of The Wall-E Theory.

â˜› Proof That Robots Will Take Over: US Navy Funds MacGyver Robot

If you haven’t seen Wall-E, basically the humans live in this massive spaceship for reasons I won’t go into/only vaguely remember (I think it’s to do with global warming – it usually is) and they have these chairs that run along tracks around the spaceship and have a holographic screen and stuff so they can go wherever they want and be entertained without ever having to leave the chair, and they have robots that take care of all the work and services.

So basically over several generations on this spaceship they devolve to have tiny bones and muscles and just massive bodies of fat because they never need to move, and it gets to the point where they become so physically and technically useless that they can’t even walk on their own two feet. It’s a great film – I definitely recommend lighting up and sticking it on. I vividly remember how hard I laughed at the scene where the spaceship tilts and throws them all out of their chairs and there’s hundreds of these walrus-like people in red jumpsuits helplessly cascading down the sloped floor and bumping into things and crashing into the wall at the bottom and piling up on top of each other. It’s up there with the hardest I’ve laughed in my whole life.

Well, yeah, that is what’s going to happen centuries down the line if technology like this takes control. Not just in terms of physically getting fatter and lazier, but also in terms of completely losing tool-using skills and technical abilities that set us apart from common slugs, all because the computers can do it better.

But hey, that’s ages away and we’ll probably all be dead before then from a nuclear war or an ice age or something, so I guess it’s not that big a deal if we want to live out the last few generations of the human race in comfort.