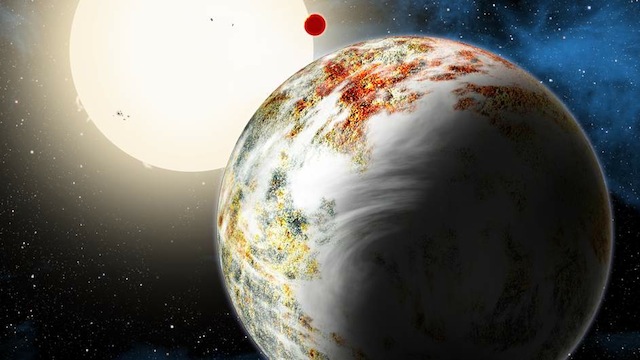 It’s pretty much the same as Earth except that it’s 17 times larger.

Astronomers from the American Astronomical Society announced yesterday that they had discovered an Earth-like planet in a distant constellation, that was roughly 17 times larger than the planet that we currently inhabit. That’s pretty fucking huge.

It’s somewhat of a milestone in space exploration too, as it was previously believed that planets that were that big couldn’t actually form and be that solid as they drew in hydrogen gas as they expanded and ended up like Jupiter – a gas based giant entity. Mega-Earth or Kepler-10C (as it has been called by these astronomers) is fully solid.

Kepler 10-C exists in a distant constellation called Draco which exists around 560 light years from Earth. It circles a sun-like star in the constellation one every 45 days. There’s also another Earth-like planet in the system called (wait for it) Kepler 10-B which orbits the sun every 20 hours (!) and is about three times the size of Earth. It’s also a lava world due to its close proximity to the sun, kinda like a level off Mario or Metroid.

Previously, large planets like Kepler 10-B had only been discovered and were referred to as ‘Super Earths’ whereas now with the discovery of Kepler 10-C and the term ‘Mega Earth’ it seems like a whole new era of exploration has begun. As part of the presentation that announced the arrival of Kepler 10-C, CfA astronomer Lars A. Buchhave revealed that they’d ‘found a correlation between the period of a planet (how long it takes to orbit its star) and the size at which a planet transitions from rocky to gaseous. This suggests that more mega-Earths will be found as planet hunters extend their data to longer-period orbits.’

This is particularly exciting because if a planet is made out of rock then it can support life, so perhaps it won’t be too long until we finally find another form of intelligent life in the universe.