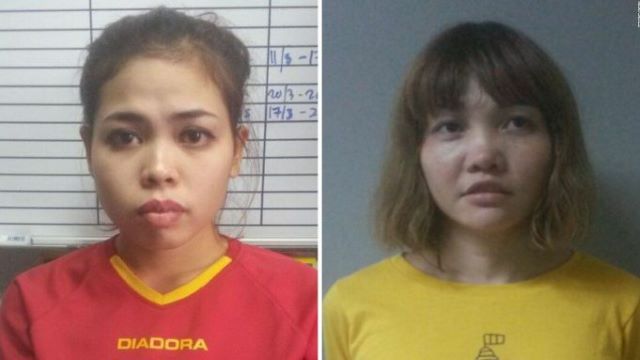 Back in February 2017, Kim Jong-un’s half brother Kim Jong-nam was assassinated in the middle of Kuala Lumpur International Airport in Malaysia, with many political commentators at the time assuming that Kim Jong-un was responsible, given how freely he’s been known to ‘disappear’ friends, foes and family members over the years.

Even more bizarre than Kim Jong-un ordering the killing of his own brother though, was the way the assassination went down. New documentary ‘Assassins’ investigates this truly insane fucking story:

What a bonkers situation. From the looks of it, without giving away any big spoilers, these two women were identified then recruited by an agent posing as a taxi driver who had “links” to a reality TV prank show, and were promised money & fame for doing things they thought were part of a prank. They even had them do a bunch of other fake “shows” where they pranked unassuming victims with non-lethal methods to make it all seem more realistic to them.

Variety does a good job explaining the motivations behind the assassination:

But “Assassins” also sketches in what happened from the top. It shows us how Kim Jong-un was elevated over his half-brother in the first place (a great story that might be out of some North Korean version of “Succession”), and how much he still feared him; according to the movie, the Chinese had provided sanctuary to Kim Jong-nam based on then idea that, if necessary, Kim Jong-un could be removed and replaced. The slightly mad tale of the North Korean fascist dynasty, established by Kim Jong-un’s grandfather, Kim Il-sung, is riveting, and so is the story of the eight North Korean henchman — including the Malaysian-based chemist who made the VX in his home lab — who were guiding the entire plan.

‘Assassins’ it out now in select theatres now and will be available on-demand on January 15th. An absolute must-watch if that trailer is anything to go by.

To read about Denis Rodman’s experiences hanging out with Kim Jong-un in North Korea, click HERE. Sounds like they had a blast!