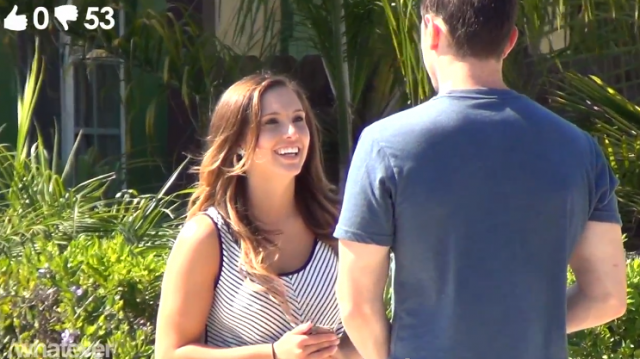 The old saying goes, “if you ask 100 people to have sex with you at least one will say yes”. These guys put that to the test.

The saying goes that if you ask 100 people to have sex with you, at least one will say yes.

The people over at Whatever decided to put this theory to the test and record the reactions of those asked. Their mission statement was simple -they “wanted to do a social experiment comparing and contrasting how males and females respond differently to being outright asked if they want to have sex”. Below are the results:

The reactions are very different. The man gets mainly laughed at and isn’t really taken seriously. The woman gets a range of responses, from being called crazy, drunk and even gets the police called on her when one guy suspects her of being a prostitute. Some believe it’s a set up or that they’re going to get robbed. She does have a 50% success rate though, with 7 out of the 14 agreeing to take her home.

Why are the reactions so different? It seems the general consensus is that if you’re a dude asking random women to have sex with you you’re a bit of a “lad” and it’s all a joke, but if a woman asks a man she’s seen as a bit of a skank. Surely that’s not right?