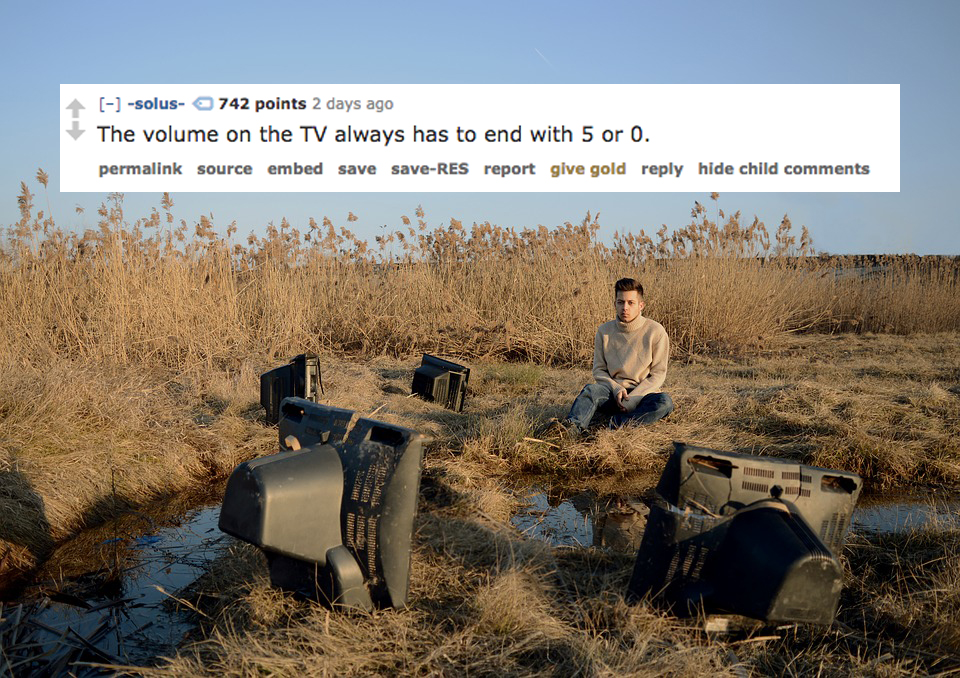 Who knew that literally everybody is a freak?

We all have our little quirks and oddities that our mates really hate but we find super normal, whether it’s ordering the same meal from your favourite takeaway every Friday night or something stranger like getting the sudden urge to stick cucumbers up your arse whenever you come into contact with them. Personally I always wash pans as soon as I’ve used them, which may seem normal enough but many of my lazier mates seem to think this borderlines into OCD territory. Whilst immediately rinsing my pots the other night, I wondered what other habits other weirdos had, so I decided to take the urgent matter to the ever-popular AskReddit board.

Over 1500 people replied to my thread that enquired about really odd rules that Redditors personally abide by and surprisingly a lot of the responses were food related, with many referencing the obsessive ways they order their skittles before allowing themselves to gorge on the tasty sugary snack. Evidently there are lots of picky eaters out there.

Another popular quirk seemed to base around PC and television volumes having to be tuned to either an exact number, divisible by 4 or one ending in 5s and 0s. Never in my life would I have assumed that people would be this picky over sound control.

Confectionery and audio afflictions aside, there were many more interesting comments posted that I feel need to be shared to the world. Here are the oddest things I found that the Reddit community got up to whilst going about their daily lives.

I Honestly Don’t Have This Kind Of Self Control

You’re Either One Or The Other

Better To Be Safe Than Sorry

Because Glory Hunters Are Totally West

This Is Just Respectful If Anything

Dude’s Watched Too Much Spiderman

Saving The Biggest ‘Til Last

His Mates Clearly Have Bad Taste

Whatever Gets You Off

I Wouldn’t Make It

Surely He Must Run Out Of Ways Eventually?

At Least They’re Getting Their 5 A Day

That Would Be Unfortunate

Heard The Sock Monster Is A Real Nasty Character TBH

You Are What You Eat

How Is This Even Possible?

Waste Not, Want Not

So yeah, pretty much everyone is a freak. That’s not even the worse of it, if you thought these were bad you should check out the most WTF secrets redditors shared online. Weirdos.