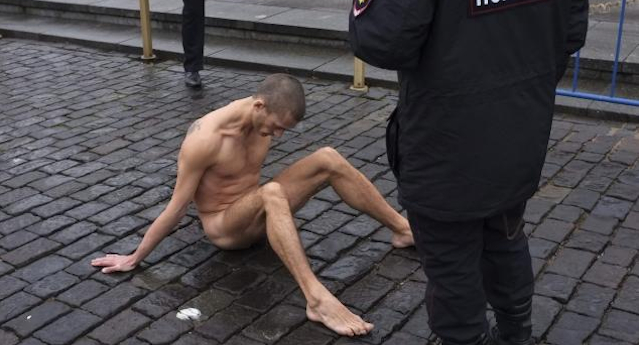 It’s a hell of a way to make a protest, that’s for sure.

Russian artist Pyotr Pavlensky stripped naked over the weekend and nailed his testicles to the cobblestones of the Red Square near Lenin’s tomb in an act that he described as being a protest against Russia’s descent into a police state.

Pavlensky stated on his website: ‘A naked artist, looking at his balls nailed to the Kremlin pavement, is a metaphor for the apathy, political indifference, and fatalism of contemporary Russian society’.  I’m not sure if it really does that, but it certainly draws attention to the problems that Russia is currently facing and makes people aware of how bad things must have gotten over there if a guy is willing to do this, as there’s no way it didn’t hurt like the most ever.

Following his protest, Pavlensky was arrested and taken to hospital. He has a long history as a performance artist specialising in self mutilation (which makes me think he probably just gets off on it anyway) and his past stunts have included sewing his lips together in support of Pussy Riot and wrapping himself in barbed wire outside a government building. Nutjob, but like I said at least these crazy stunts are drawing attention to the problems that Russia is experiencing. It’s just a shame most people will probably only remember the crazy stunt.

â˜› More Mutilation: A Guy At Gathering Of The Juggalos Cut Off His Nipple For $100