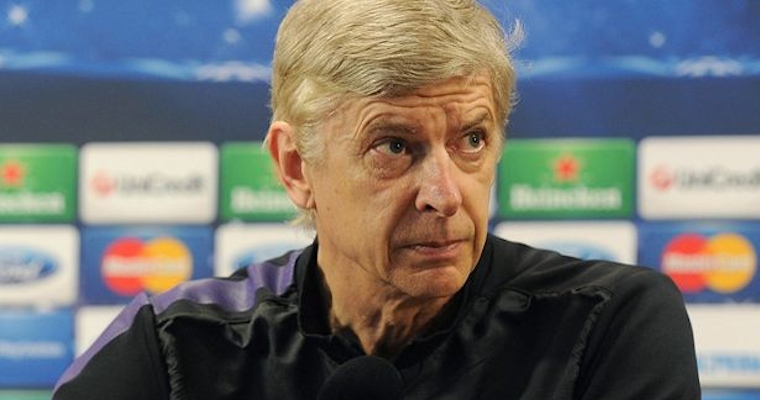 Arsene Wenger has always had a slightly dubious relationship with the media but he really threw all his toys out of the pram at a press conference today.

This is great. I haven’t really got anything against Arsenal like it seems a lot of people in England do – hell they practically gave the Carling Cup to us back in 2011 so how the hell could I hate them? – but it has been pretty enjoyable watching their decline season upon season.  See Arsene Wenger turn from one of the professors of the game into an old man who doesn’t really seem to know anything about football at all really and has had to resort to wishy washy excuses that don’t really make any sense in order to defend against Arsenal’s extensive shortcomings has been an obvious highlight of this too. And this could be his best outburst yet.

Normally Wenger is OK at press conferences and most of his meltdowns are saved for the side of the pitch where he frequently kicks water bottles, undoes his tie and try to zip his jacket up, but today at the press conference regarding the Bayern Munich game tomorrow he really went nuts. It started off pretty badly when he was getting real tetchy about people asking about Arsenal losing at home in the FA Cup on Saturday to Championship side Blackburn – despite the fact that Arsenal dominated the game and Blackburn only had one shot on target – which was bound to go down like a ton of bricks. For the most part though he just about kept his cool and you couldn’t really say he was being that much of an asshole about it given the situation and his likely mood.

â˜› Watch This Next:  Quentin Tarantino Has A Meltdown When Interviewed By Krishnan Guru-Murthy

Things take a turn for the worst though when a reporter asks him about his contract situation at Arsenal amid recent rumours that he has been offered a 2 year extension to his deal that is currently scheduled to end in the summer of 2014. You can clearly tell Arsene is vexed about this little question as he starts off by saying that this is the ‘wrong information’ and that it is a bad idea to start believing this wrong information. He then completely freaks out, loses his tempers and asks why all the reporters are looking at him. Bemused, they explain that it’s because his press conference, which makes perfect sense as it’s their jobs to go and hear him talk crap all the time. He then accuses said reporter of leaking the stuff about the questions and hurriedly moves onto the next question.

Although that is fairly freaky my favourite part came later on when he suddenly refuses to take any more questions regarding the Blackburn game because the press conference after that match has already happened, and he says he only wants to talk about the upcoming Bayern match from now on. Then he becomes even more agitated when some woman asks her a question about what insider knowledge Lukas Podolski has been able to shed on Bayern Munich, which in fairness is really dumb because he hasn’t played for them for ages. He manages to keep his cool for that one though, despite the look on his face.

But then someone asks about the quality of Bayern Munich’s defence – which isn’t exactly a bad question and is one that you would kind of think that he might want to answer given his previous statements – and he goes completely nuts, telling the journalists present that he doesn’t want to talk about Bayern Munich today. Wenger then goes on to talk even more nonsense, stating that 0-0 at home in a Champions League game is a very good result, which I think even some girl who doesn’t know anything about football could probably tell you isn’t the case. I think the journalists get a hint then and move on to asking Mikel Arteta some questions instead while Arsene glares on.

It’s pretty much comedy gold and kinda reminded me of the ramblings of a senile man who hates everything. I can respect Arsene Wenger for what he’s done in the game but the fact he hasn’t won anything in almost ten years kinda speaks for itself, especially when you lose to a team like Birmingham in a major cup final. The media is part and parcel of the job really so you can’t expect them to not ask questions when you’ve had a bad day at the office and to react like this just reeks of stress and disparity. Wenger should probably up and leave but it seems like he wants to leave on his terms and wants to stay and win at least one trophy before he leaves so the last ten years haven’t been a complete failure, but it doesn’t look like that is going to happen any time soon.

Still, if it means we get to watch his descent into senility and we’re provided with more videos like this – and hopefully more losses to Birmingham in decisive games – then I’m happy for him to stick around as long as possible. Check out the video below:

â˜› Read This Next: Arsenal – Why It’s Impossible To Like Them