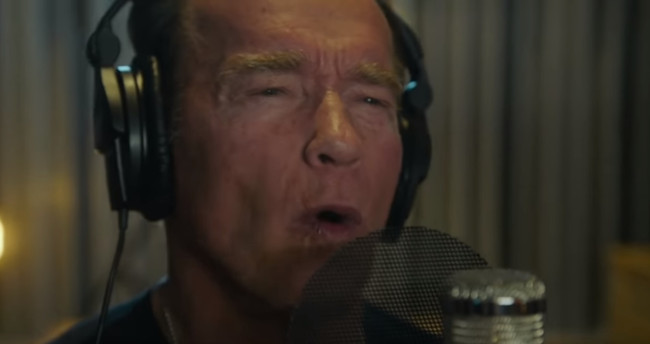 A guy like Arnold Schwarzenegger has pretty much done it all – and then some – but as he slowly gets older it seems that one of the last things on his bucket list was to release a rap song.

Arnie can finally tick that box though after he teamed up with Austrian folk singer Andreas Gabalier, who is a pretty big deal back in his home country where he’s racked up seven number one albums. The pair have recorded The Motivation Song, which features Gabalier singing about Arnie’s career before the man himself steps in to spit some bars about working hard and following your dreams.

It’s about as stupid as you can imagine and the video is even stupider, as the pair do press ups in the studio and work out on Venice Beach. You’ve gotta love it though because it’s Arnold Schwarzenegger:

Kinda set the tone with that ‘Hasta La Vista Baby’ at the start didn’t it? Favourite lines include ‘he said ‘here I am, hold on!’, ‘wore American sunglasses for the first time’ ‘Governator, Mr Universe, Olympia’ and ‘It’s why the President Of The Special Olympics praised Arnold ’till the end of days’. Great double shout out to the President Of The Special Olympics and the lesser known Schwarzenegger movie ‘End Of Days’ there. Respect – never thought I would hear a song mention those two things in one rhyming couplet.

Kinda finding it hard to believe that this Gabalier guy is legitimately a serious musician over in Austria considering how awful and stupid this song is? Surely he must have more self respect then to sing all these weird things about Arnold Schwarzenegger when he’s right there in front of him? Doesn’t anyone else find that a bit weird?

Also Arnold’s stance when he’s rapping/taling really is something else. So much going on in this video/song.

For more of the same, check out this Arnold Schwarzenegger murder conspiracy. It’s pretty insane.