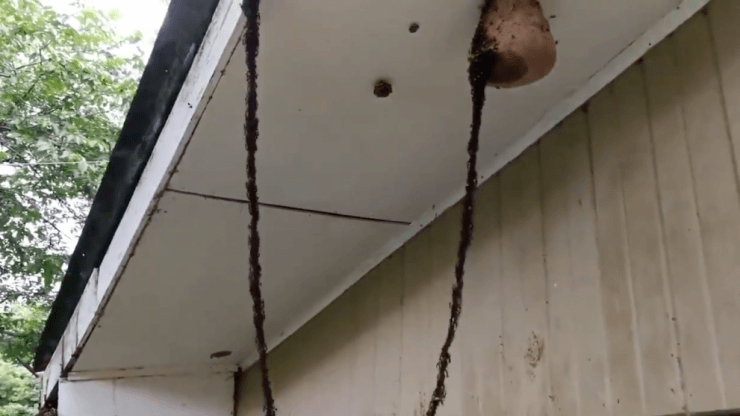 Ants are so goddamn smart.

I think everybody knows that ants are insanely smart and excellent at working as a team – I mean you’ve seen that movie Antz right – but videos like this really do drive home just how much better they are than humans at working in tandem together.

The video comes from a guy called Francisco Boni over in Brazil who managed to capture a bunch of legionary ants ransacking a wasp honeycomb. Instead of doing this in the traditional fashion of just attacking it full on, they’ve instead decided to use their bodies to make some kind of weird hanging bridge that they can all run up and down to get to the nest.

Attack of legionary ants (also known as army ants or marabunta) to a wasp honeycomb. Impressive the level of swarm intelligence and collective computation to form that bridge. pic.twitter.com/StvDkmv8x8

Incredible. Perhaps you’re confused as to why they’ve decided to build the bridge in that fashion looping down from the ceiling? Well, I’m glad you’ve asked because we’ve got an explanation for you below courses of Francisco Boni again:

At first I was thinking that this was merely a failure mode that happened when they decided to follow & build the bridge (premature optimization gone wrong). Or that there was something in the ceiling affecting the trail pheromones.

But then a biologist pointed out something more fundamental. Many species ants have a hard time walking upside down. For ants, it is more effective to follow the trail over a bridge that goes down and then up than in an inverted upside down walk.

Bridge formation could also more be more effective for looting and carrying loads if it provides separate lanes that allow for more efficient travelling in either direction, eliminating congestion.

Studies show that ants partly optimise traffic flow. Ants headed back to the colony loaded up with loot use centre lanes, while out bands ants use the edges. Ants are also sensitive to gaps and when other ants trample over their heads, so they start to follow other rules.

Gotta love science right? Makes perfect sense when he puts it like that. Goddamn ants are amazing.

For more ants, check out this video of them carrying a giant worm somewhere. Teamwork boys, teamwork.