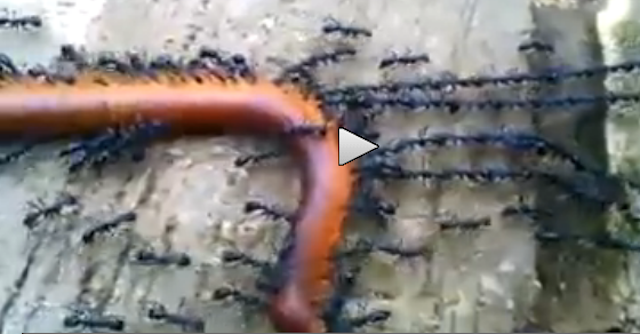 Ants put humans to shame by all working together to get this worm back to their nest to eat.

Ants aren’t exactly my favourite animals – in fact you barely ever see them anymore so I don’t even think about them that much – but the movie Antz was pretty good and you can’t help but admire the way that they’re always working as a team for the collective benefit of the hive. It puts human teamwork to shame really.

I don’t think I’ve ever seen a better example of it than in this video, where a whole bunch of ants team up to carry back a massive worm to the hive so that everyone can eat it and nobody goes hungry. If only we acted like this, it would probably solve a lot of the world’s problems.

It’s literally mind-blowing to see all the ants coming together in a massive chain and pulling the worm along like a giant pulley system or something. Ants are smart man, that’s all I’ve got to say about it. Also you’ve got to respect them for this incredible ant gang bang too.