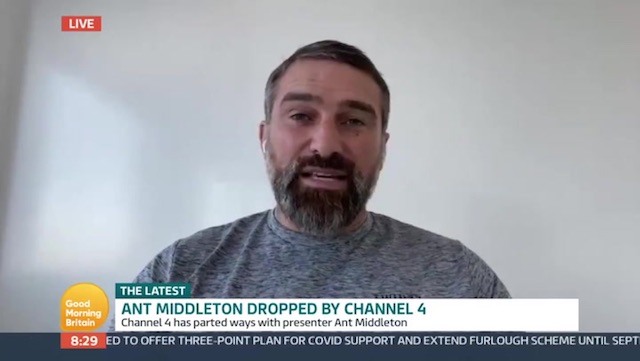 He doesn’t sound too happy.

A certain section of the country were almost inconsolable after it was announced that Ant Middleton would no longer be appearing on the next series of ‘SAS Who Dares Wins’ due to his ‘personal conduct’, but now Ant has decided to come forward and give his own version of events, claiming that it was nothing to do with his opinions on the Black Lives Matter protests last summer.

Middleton is instead claiming that he was going to be walking away from the show anyway because it was becoming too much like a reality show and not an accurate portrayal of what it’s like to get into the SAS, and that Channel 4 as saying that there were certain aspects of his ‘military banter’ that didn’t go down too well with people involved on the show and behind the scenes in order to try and save face in the matter. Here’s the full interview from Good Morning Britain, as well as some of the key quotes:

I’m always good and positive and I’m about to drop some truth serum.

That Channel 4 statement is very reckless and desperate, that’s the word desperate, it’s been backed by excuses like the BLM tweet that I did just under a year ago.

We dealt with that tweet and I filmed two more series with Channel 4 after that before being dropped.

The inappropriate comments, its all smoke and mirrors, from the last episode it became a half scripted reality show and full control was taken from me.

I was done with SAS Who Dares Wins they knew that I was going and then all of a sudden they drop this bomb, I’ve been axed.

They’re just protecting their brand, they knew I was going.

It’s never direct, there’s a new protocol on set that if people feel offended then they can complain anonymously, someone has probably seen military banter or humour, it’s something indirect that they’ve seen and felt offended by.

I don’t really know what to make of that – it kinda sounds like he’s saying a lot without really saying anything to be honest doesn’t it? Seems like he did screw up with some of his comments/military banter/bullying but he’s just trying to laugh it off and say he was going to be leaving anyway.

Classic mentality of a guy like that really, but I’m sure he’ll have a who of supporters out there for taking a stand and voicing his opinions. Gotta love flag Twitter.

For more of the same, check out when Ant Middleton labelled Katie Price a clown. That was a good bit to be fair.