He’s going to regret the next four years.

Anonymous have been targeting various hate figures in society for some time now, and it’s always slightly confusing as nobody is ever really sure who Anonymous are and just what they’re actually doing because of the very nature of their organisation.

The group have already targeted Donald Trump, but in a series of tweets released yesterday they threatened to expose several of his more dodgy deals – in particular those that he’s involved with featuring Russian mobsters, child traffickers and money launderers. Here’s the exact announcement: 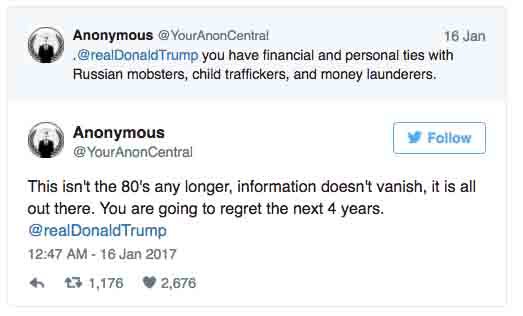 .@realDonaldTrump has made it his policy to not respond to #Anonymous on twitter. What a coward! WHAT A WEAK PRESIDENT. So sad. #MAGA #Love pic.twitter.com/rHCKJV31xn

Yeah, like you can probably see, none of that really means anything as they’ve provided no evidence and literally just posted some random lines on the internet. Could easily be forgotten about or could actually lead to something big in the future, but it seems more likely that if Anonymous did actually have any dirt on Trump then they would just release it to the world in the first place rather than spending a while hyping it up to begin with. Just do something already guys, seriously.