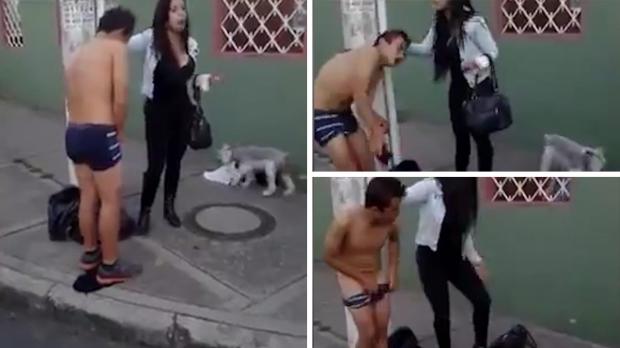 Getting robbed completely and utterly sucks, and it’s probably even worse if you manage to catch the culprits in the act because most of the time they’re probably going to be able to beat the shit out of you as well. Nobody wants to get robbed and beat up, do they?

Well it’s good to know that that doesn’t always happen as this badass woman from Bogota, Colombia proves. She found some annoying kid in her house trying to rob her and so decided to teach him a lesson. Grabbing him by the hair (lol), she managed to force him to strip completely naked and then stole his clothes so he had to walk all the way back to his house without anything on. Absolutely and utterly told:

Pussy. I can’t believe that the woman could force him to do all that just by pulling his hair but I guess she had a good grip and was pretty vicious? Either way fair play to her for absolutely ruining that little kid’s life because there’s no way he’s ever going to live that down. Probably not going to rob any houses again anytime soon either. Got told son.

For another ridiculous robbery, check out this couple that is making out so passionately that they don’t even notice the restaurant is being robbed. True love eh?