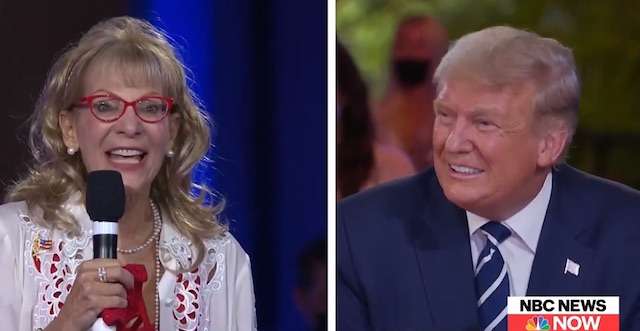 First things first: I really hate it when Americans call an event where people ask questions of an authority figure a ‘town hall’. I mean I get why they do it and I’m not sure what else they could call it, but it just sounds really weird and strange to me?

They’re not in an actual town hall and they’re not asking questions about a town so it just doesn’t sit well with me. I also don’t get how it just suddenly made its way into the general lexicon and now is just an accepted format and blanket term for it. I hate it.

Now I’ve got that off my chest – thanks for listening guys – we can talk about this really weird segment from Donald Trump’s recent town hall (ugh) on NBC last night. Forget the fact that he was doing this without a mask less than two weeks after testing positive for Coronavirus, this was all about his interaction with a weird old lady named Paulette.

Despite the fact that Paulette (reeling from he fact that this is a real name as well) revealed that she was probably going to be voting for Joe Biden in the upcoming election, she then proceeded to hit on Trump when she asked him a question by saying that he had a lovely smile and was very handsome. Talk about shooting your shot hey:

Paulette is shooting her shot at Donald Trump of all people on national TV LOOOL WTF pic.twitter.com/FQFjq5uzWb

Thirsty. It’s kind of annoying that there isn’t more of the clip so we can see where it went from there, but maybe it’s just funnier this way in any case.

Can’t really understand where Paulette is coming from though. I mean sure I could get someone having the hots for Donald Trump if they were a raving Republican or Trumper, but if she’s probably voting for Biden then surely can’t be that into Trump? Maybe it’s some weird kind of hatefuck fetish or she was trying to neg him into getting with her via the Biden remark – I guess only Pauline knows what she was doing for sure. Let us know Pauline, please.

For more of the same, check out this guy who found a pork scratching that looks like Donald Trump. What a time to be alive.