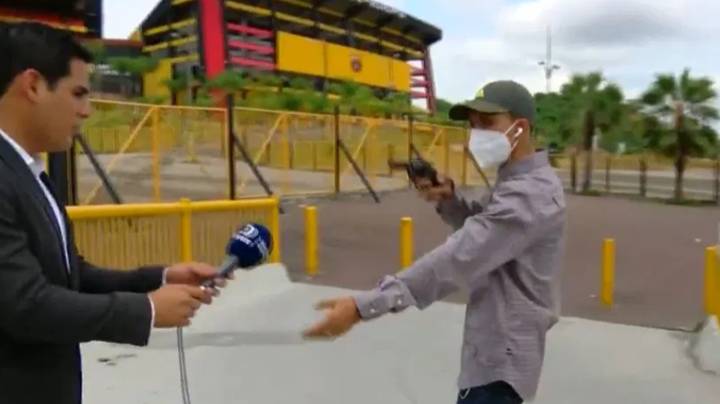 You kinda think that you’ve seen it all when it comes to live television these days, but it turns out that this isn’t the case after an Ecuadorean television presenter was held up at gunpoint just as he was about to go live.

Diego Ordinola was reporting from outside the stadium of Ecuadorean Serie A football team Barcelona SC when he was jumped by the masked man. The cameraman was filming at the time and got everything on tape, but was forced to hand over his phone to the robber before he sprinted off and jumped on the back of a motorbike to make a getaway.

Take a look at the bonkers footage below:

That really is crazy, but it’s also quite funny how the pair of them run after the criminal and watch him get on the bike and speed off to ensure that they’ve managed to capture all the footage. I suppose they’re some of the top people in the game over in Ecuador because they’ll do anything to get the scoop though, right?

Anyway, at the time of writing the criminal has yet to be apprehended, but hopefully it won’t be too long until they get him and the cameraman gets his phone back. Lol, who am I kidding?

For more of the same, check out this badass woman who held a suspected arsonist at gunpoint on her property. Awesome.