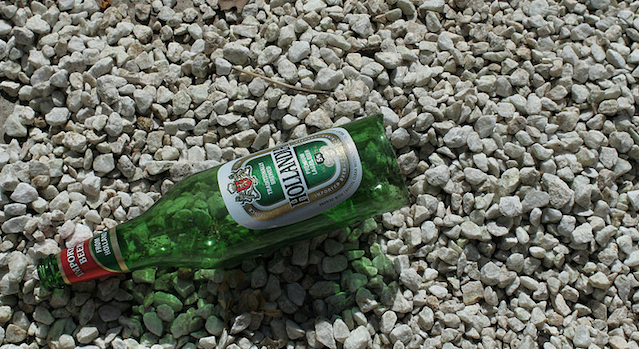 Is this a good idea and who exactly does it benefit?

This might not be the best idea, but it certainly does have some benefits. It’s been organised by the Rainbow Foundation and has been paid for by the Dutch state and is aimed at getting alcoholics who hang around in parks and on the streets causing trouble to get off the streets and do something useful by enticing them with beer. Obviously this only keeps them off the street for X amount of hours and then they’re right back on it again drinking, but I guess getting them off for 8 hours is better than nothing.

The alcoholics clean the streets three days a week from 9:00 am to 3:30 pm and get paid around eight pounds, five cans of beer and half a packet of rolling tobacco. Nothing like slave labour, right? They’re also given two cans of beer when they arrive for their shift and two cans of beer for lunch alongside a hot meal. They then presumably head to the nearest park and get loaded as they have the next day off.

The chief executive of the Rainbow Foundation Gerrie Holterman explained the mentality behind the initiative: ‘The aim is to keep them occupied, to get them doing something so they no longer cause trouble at the park. This group of chronic alcoholics was causing a nuisance in Amsterdam’s Oosterpark: fights, noise, disagreeable comments to women.’

One alcoholic – Frank – offered his take on the scheme too: ‘I think I can speak for the group and say that if they didn’t give us beers then we wouldn’t come. We need alcohol to function, that’s the disadvantage of chronic alcoholism. It’s good for us that we’re drinking in a more structured way, but I don’t think we drink any less. When we leave here, we go to the supermarket and transform the â‚¬10 euros we earned into beers.’ He added that he doesn’t think anything has changed on the four days that they’re not working as all the alcoholics are still standing outside the supermarket at 8:00am looking to get some drinks.

So is this a good thing? Like I said at the start, I suppose it’s positive that it’s getting alcoholics off the streets for a few days a week and giving them something to do (as well as cleaning up the city) but it doesn’t seem to be doing anything to help their addiction other than perhaps making it slightly more structured. Perhaps if it ran seven days a week this might help them, but it doesn’t really seem to be doing much good right now for the alcoholics and seems more aimed at making sure the people of Amsterdam don’t get pissed off with their presence all day.

â˜› More Alcoholics: The World According To Alcohol Consumption