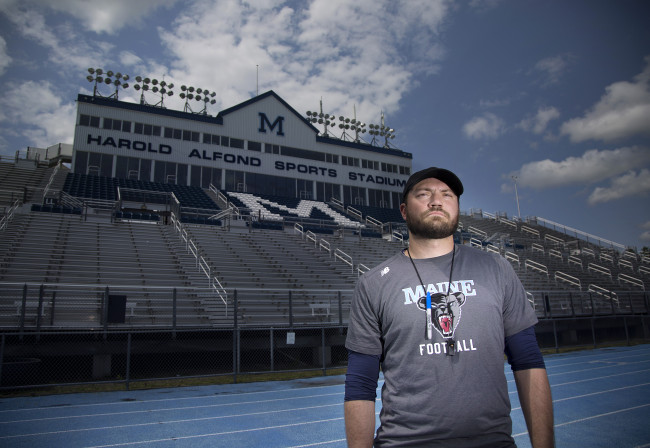 We’re going for a hail mary.

Everyone might be doing drugs at the weekends these days, but they tend to do it in a fairly discreet location to minimise the potential stigma from other members of the public and just because you probably don’t want everyone to know you’re an absolute fiend.

This unfortunately can’t be said of everyone though, which is why you see skag heads wandering around the streets doing whatever all the time and this guy from the University Of Maine American Football team trying to do blow on the sly during the middle of the game. The clip below clearly shows coach Nick Charlton being given what looks like a baggy by some guy who definitely looks like a coke dealer, then looking like he sniffs it behind a laminated playcard that the sketchy guy holds up so that nobody can see him. He even wipes the end of his nose afterwards.

Take a look at it and see what you think:

Maine Black Bears head coach seems to be a fan of coke & I’m not talking about the drink…pic.twitter.com/zXNX9XCPQx

I mean I’m not saying it’s definitely blow, but pretty much all of the telltale signs are there, right? And to be honest, it’s probably gonna help you out if you’re an American football coach because it’ll just make you shout and rave and yell at people to make them nail those plays or whatever.

Unfortunately, it didn’t lead to a victory for the University as Towson managed to beat them at home. Sure Charlton was back on the bag that night as well, yelling at people in a much more confined environment.

For more of the same, check out this man snorting cocaine outside Plymouth library. Classy.