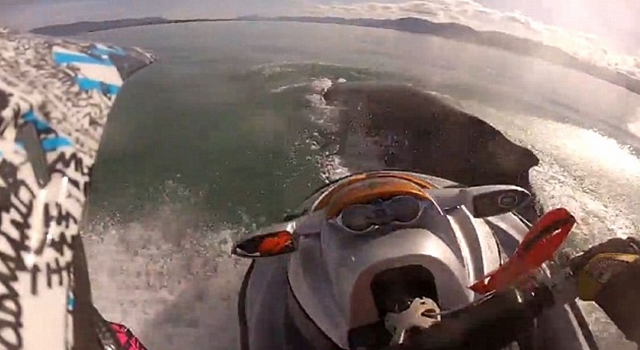 I’ve never tried jet skiing, partly because I’m not rich but mostly because I’m terrified of what lurks beneath the waves. This video shot off the Icelandic coast this week confirms my terror of the deep. You just never know what’s going to pop up from down there.

Brynjar Thor Gunnarsson and his pal were mucking about with their jet skis on the deep SkagafjÃ¶rÃ°ur bay off the northern coast of Iceland this week. They were just jazzing about like you do, having a blast. The fellas caught sight of some whales blowing out air in the distance, so decided to go over and get a closer look. My personal reaction would have been to go in the opposite direction to the massive mammals, but Gunnarsson and his colleague are made of sterner stuff.

The poor behemoth of the oceans rose out of the water at the exact wrong moment and Gunnarson basically 50-50’s the thing. If he’d been going any faster he might have got some RAD air but thankfully for the whale he wasn’t flooring it at the time so it probably wasn’t injured. Those things have so much fat on them that it might not have even noticed I guess.

Anyway, there can’t be many people who’ve managed to boardslide a humpback whale so good on you. Have a look at this: