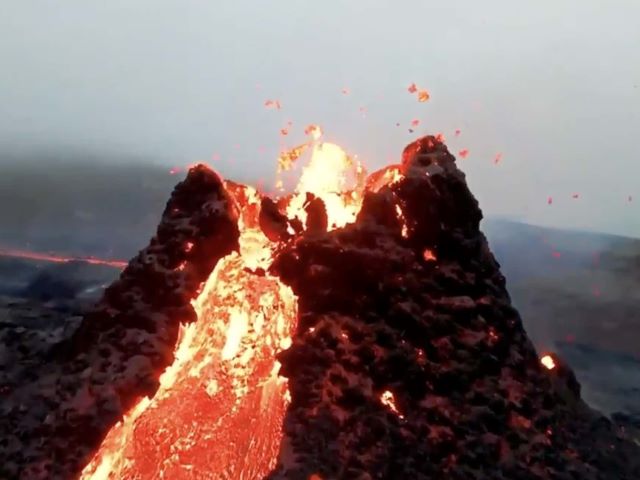 Of all the crazy natural phenomena that occur on Earth, volcanoes have to be right up there. Just shooting out lava left and right and causing pandemonium like a scene out of the end of the world.

You may have heard that Iceland’s Fagradalsfjall volcano erupted this past weekend for the first time 800 years, and thanks to the wonders of modern technology, we’ve got some awesome drone footage via Bjorn Steinbekk:

This video, taken on a drone by Bjorn Steinbekk of the #Fagradalsfjall volcano eruption in #Iceland, is absolutely insane. 🤯🌋@MacLeanComms @thejohnrourkehttps://t.co/37gSITSrvs pic.twitter.com/XA8zA4Wzx5

Damn that’s cool. Was fully expecting that drone to just melt away into nothingness as that lava shot out towards it, but looks like pilot Bjorn knew what he was doing. I mean one little splatter of lava and that drone would have been utterly f-cked, right?

Wilder still, there’s a whole bunch of people hanging out by the side of this volcano to get a closer look at the action. What are they thinking???

People in Iceland are just casually hanging out on an active volcano pic.twitter.com/FRV2hts60h

A COVID party beside an erupting volcano? Why not? Life would be too boring otherwise. For the rest of us, we’ll just look on from the safety of the internet. Looks like fun though, will give them that.

P.S. What a great year for drones thus far! Check out this epic drone footage through a bowling alley if you haven’t already:

This single shot #drone film by JayByrdFilms IS the best I’ve seen yet… THROUGH a Bowling Alley!!! Hard to believe its actually real… Sound On, and watch til the end!!! pic.twitter.com/fkUZOjcffF

For a look at how China is using flamethrower drones to annihilate wasps nests, click HERE. Gotta be done.