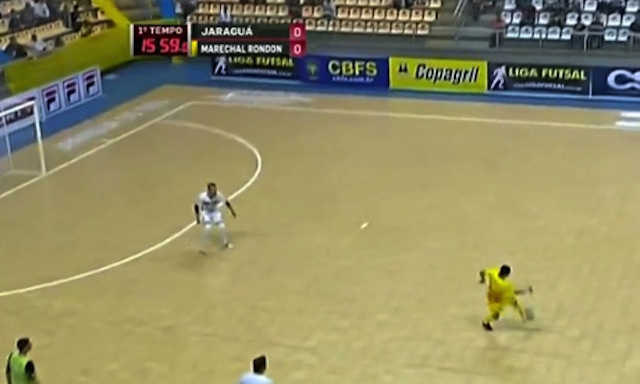 This might be the best futsal goal we’ve ever featured.

We’ve featured a couple of incredible futsal goals before on Sick Chirpse, but this might be the best of the bunch, happening earlier this week over in Brazil.

The ball gets kicked from the goal kick to Marcio, who has his back to goal but notices the keeper off the line. It bounces once and he hits a Zlatan-esque back heel on the half volley, lobbing it over the stranded keeper. Not only that but he does one of the most killer celebrations ever (and I’m not just saying that because I did a similar one recently, no sir).

Marcio was suitably modest when talking about the goal afterwards:

‘I was fortunate to catch the ball well, hitting it and scoring a great goal. It is certainly one of the best goals of my career.’

No big deal. Unfortunately it wasn’t enough to get his team the win, as Marchal Rondon ran out 2-1 losers to Jaragua. Unlucky pal.