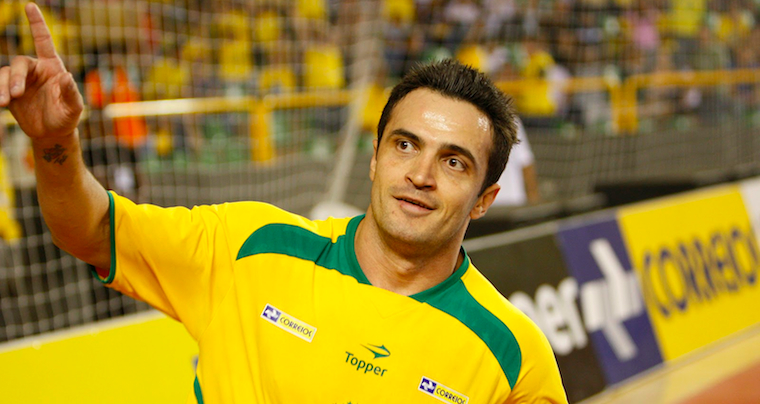 It’s not often i say this but this is an absolutely incredible goal and I have never, ever, ever seen anyone do anything even remotely like it. Step forward the original Falcao and check out his spinning backheel freekick lob and be amazed.

Ok this might be a goal in futsal and not real football but it doesn’t make it any less incredible because I have never ever seen anything like this ever in the history of watching football, beach soccer and futsal. Ok that’s a lie I have never ever watched futsal except for the occasional highlight but I have watched beach soccer a couple of times because it’s always a laugh seeing those old players being really fat and trying to get stuck in, but even if I had watched futsal then I doubt I would have ever seen anything like this before ever because it’s just completely phenomenal and insane and I don’t even know how you would do it. I guess maybe a futsal ball is smaller than a regular football but even so it’s just completely crazy how he can even do this. Seriously.

The guy’s name is Falcao – remind you of another famous South American sickhead? – and I guess this is a video from some kind of South American futsal league or something  Falcao is apparently widely recognised as the greatest futsal player of his generation – kinda like the Lionel Messi of futsal I guess – and has scored a shit ton of amazing goals throughout his career. However, this one really took the biscuit. It happened during an annual futsal exhibition match called ‘Futsal Fest.’ Cool name huh?

Anyway, Falcao is playing for Ateltico against Estrelas and the action picks up with another Ateltico player eying up a free kick and looking as if he’s going to take a shot on goal.Instead though he cheekily lays it off to Falcao who runs at the ball and somehow in one fluid motion manages to flick  the ball up while making a 180-degree turn before he backheel-flicked a lob over his opponents and into the net. To say it is completely sick would be an understatement. I can’t even understand how he would do that or how he did that or even how he would think of doing it. It’s insane.

Check it out below. Also props to my boy MattG for alerting me to this one: