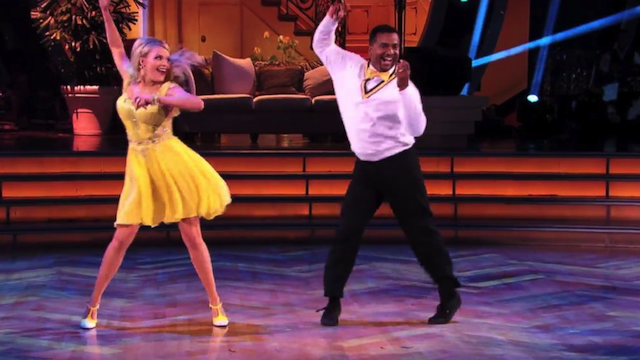 The one we’ve been waiting for.

If you’ve been checking out Sick Chirpse regularly in the last couple of weeks, then you’ll have noticed that Carlton has been absolutely killing it on Dancing With The Stars, recently appearing in an Austin Powers dance routine.

It was clearly only going to be a matter of time before he bust out the dance he made famous as Carlton from Fresh Prince, and that moment finally arrived last night when he and his dance partner Witney Carson busted it out. Everyone knew it was going to happen from the first notes of Tom Jones’ ‘It’s Not Unusual’, but they wisely decided to save it until the end of the routine – a tactic that gained them a perfect 40/40 score from the judges. Not bad at all, Will Smith would be proud.

I don’t know who else is participating in this series of Dancing With The Stars USA – let’s be serious why the hell would I? – but Carlton must surely be the favourite now. Without the Carlton in his arsenal though it might be slightly harder for him to nail it later on – maybe he could try out this dangerous new butt dance?