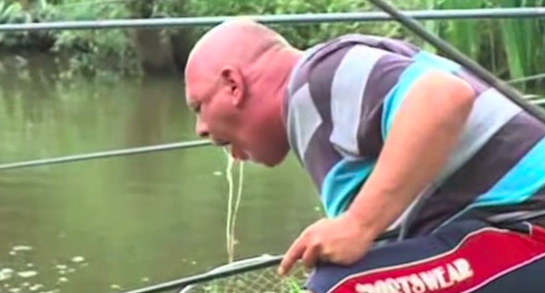 You probably shouldn’t be competing for the booze cup if you don’t normally drink.

This clip of what’s being described as a ‘competitive fishing competition – that also involves drinking’ has been doing the rounds and is pretty fucking stupid/dumb. It basically involves some fisherman called Andy who doesn’t normally drink, but on hearing he could win ‘the booze cup’ – I’m guessing this goes to the fisherman who manages to drink the most during a competition – he goes ahead and necks 25 beers like a true lad. You can guess what happens next.

This could quite easily be fake with all the Belgian subtitles and the fact that it seems like it’s orchestrated a little too perfectly, but hey when it’s as dumb as this you’re still gonna watch it, aren’t you? If the booze cup actually exists then I reckon I might have a chance of winning it so I might head over there and enter it. I couldn’t do a worse job than Andy in this clip. If you feel like joining then hit us up, just make sure you don’t drink any beer after it’s fallen in the river or you might end up with a gigantic mystery growth on your body like this guy.