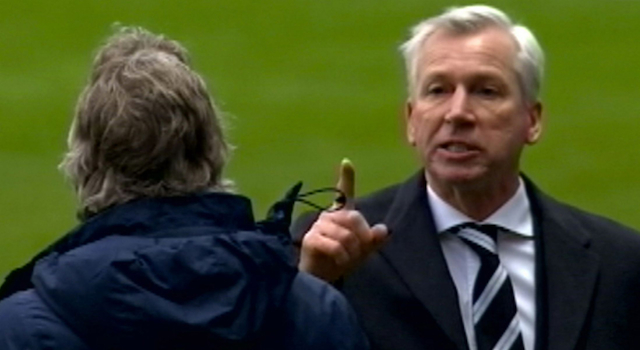 If you checked out the football yesterday, you would have seen that Cheick Tiote scored an absolute rocket for Newcastle at a vital point in the game that ended up being chalked off for a rather dodgy offside decision against Yohan Gouffran, which was pretty unbelievable when it happened.

As you might expect, Newcastle boss Alan Pardew wasn’t happy with the decision at all – in fact you would probably say that he was completely furious – and began debating it with the referees on the touchline as well as Manchester City boss Manuel Pellegrini. Obviously Pellegrini agreed with the decision as it benefitted his team and I assume he tried to explain to Pardew why he thought that it had happened.

Unfortunately, Pardew was having none of it and instead said the following to Pellegrini: ‘Shut your noise! Fucking old cunt!’ As you might expect, this footage went viral on Vine fairly instantly and is pretty hilarious.

Since the incident Alan Pardew has apologised, offering the following statement regarding his actions: ‘It was a heat of the moment thing. We just had words that we always have as managers, to a degree. I have apologised to him and fortunately for myself, he has accepted that’.