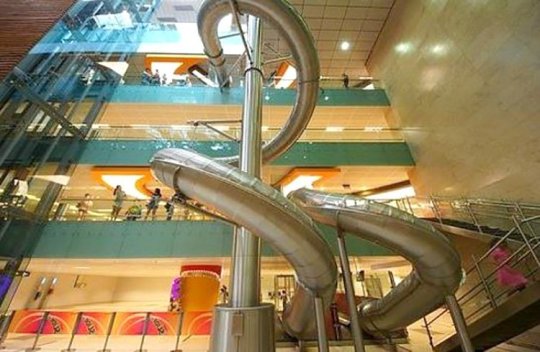 Trawling around airports is always a bit of a nightmare because they’re so massive and everything is so far away, so imagine how cool it would be if when you dropped off your bags all you had to do was jump on a slide and you would be whisked to your gate?

Well, you don’t have to wonder any more if you’re heading to Singapore’s Changi airport as this is a new system that they’ve managed to install there. You can see a video of some dude called Yusuf El Askary demonstrating it in action below:

Looks so much funny specially as there’s a mini playground with nets and poles at the bottom, although you probably can’t play in that if you’re an adult without attracting some weird looks. Maybe if you’re getting a late night flight or something though.

Incredibly, this slide isn’t the only one in the airport and there’s also a massive three storey one in Terminal Three which takes you all the way from the top of the terminal to the basement. You unfortunately have to spend at least eight pounds in the terminal in order to be eligible to ride that one, but it’s not exactly hard to do that in an airport with food and magazines and what not so it’s not that much of an imposition. Probably worth it just to ride the slide to be honest.

For more of the same, check out this see through slide on top of a skyscraper. No thanks.