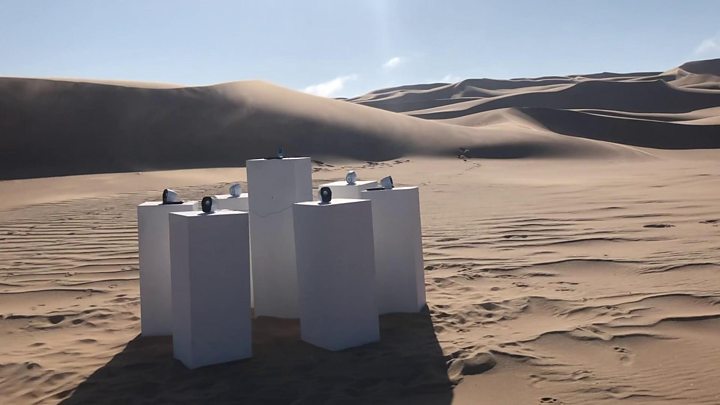 The ultimate homage to the song.

I’m not sure if I still find the joke/meme/phenomenon/whatever about ‘Africa’ by Toto still funny, but it turns out that countless people out there are still enjoying just how epic that song is.

The latest person to go above and beyond the call of duty with it is 27 year old Namibian artist Max Siedentopf who has decided to construct a sound installation somewhere in the Namibian desert that will play the song on loop, hopefully for the rest of eternity. Here’s what Siedentopf had to say about the project:

[I] wanted to pay the song the ultimate homage and physically exhibit ‘Africa’ in Africa.

Some [Namibians] love it and some say it’s probably the worst sound installation ever. I think that’s a great compliment.

There are six speakers attached to an MP3 player with the one track on it. I hope the song will play for 55 million years.

The batteries are solar powered so they won’t run out, and most parts of the installation were chosen to be as durable as possible, but I’m sure the harsh environment of the desert will devour the installation eventually.

Er yeah great I guess? Not really sure what the point of this is except for someone to read this and kinda shrug and let out a little smile, but Max has actually gone out and put the effort in to do this so here we are. If his next installation is anywhere as near as groundbreaking as this then he’ll probably win the Namibian equivalent of The Turner Prize for the next 20 years or whatever. Guy’s definitely got a bright future.

For more Africa, check out this cover that Pitbull recently recovered. Was way better than I thought.