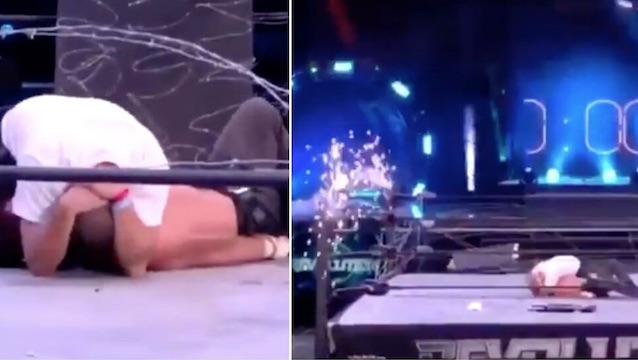 I’ve talked in these pages a few times about how AEW was really turning the wrestling world on its head by providing an entertaining, much better wrestling project than what the WWE is currently offering and it was all coming to head with their Revolution PPV yesterday, which felt like a genuine milestone going into it yesterday.

Sadly though, after a great three hours of wrestling they failed to stick the landing when the barbed wire exploding ring match in the main event between Kenny Omega and Jon Moxley went badly wrong at the end. The highlights I’ve seen of the match look pretty good – I’ll throw a few of those in below – but the set piece at the end when the ring was meant to explode was really embarrassing.

Omega ended up winning and leaving Moxley handcuffed in the ring before it exploded. Eddie Kingston thankfully ran down to shield Moxley and save him from getting badly messed up from the explosion, but then the explosion went off and it was kind of like something you might see at a really bad firework display at your local trailer park, rendering the whole issue kinda moot and destroying the impact of what would have otherwise been a pretty powerful moment.

An exploding barbed wire bat to the face of @JonMoxley!
Order #AEWRevolution now on all major providers, @brlive, and @FiteTV (international fans) pic.twitter.com/8Qq7sjEXBl

Eddie Kingston came out to save Jon Moxley from the lamest explosion ever. ruined a great moment#AEW #AEWRevolution pic.twitter.com/x53SdHpHCI

Lol yeah, really don’t know why they would have a countdown for that because they probably could have continued wrestling and not even noticed it was such a non event. Sadly for AEW it seems like the explosion was botched or something and it kinda ruined the PPV for a lot of people – at least according to these fans:

Well if you watched that classic match, you should’ve noticed how they can give the illusion of the ring “exploding”. Every deathmatch had that impressive illusion at the end, except for AEW. They had the proper “illusion” handed to them and they fucked it up.

AEW did an exploding barbwire deathmatch last night and it was very cheap and dissapointing. All the explosions were small and weren’t even attached to the ropes or outside boards, and the ring explosion was pitiful at best.

The exploding barn wire match didn’t live up to the hype. Nothing inside the ring only the perimeter. Eddie laying there like he was seriously hurt protecting Mox was terrible especially seeing that nothing was inside the ring.#AEWRevolution

Actually the PPV was awesome. It was the exploding ring that was a let down. Hence the subject of this tweet

Other than the “exploding ring”, I’ve got to say I really enjoyed the @AEW ppv #AEWRevolution last night.

I guess you have to say that that did suck, but AEW is a new wrestling federation finding its feet and it’s doing a whole lot more stuff right than wrong at the moment, so hopefully this doesn’t detract people from the overall product that they’re putting out there these days. I never thought I would be interested in wrestling again, but some of the stuff AEW is doing really has me excited again and that’s the biggest compliment I can give them. They’ll get there.

For more of the same, check out when Sting returned on AEW a few months ago. A really iconic moment.