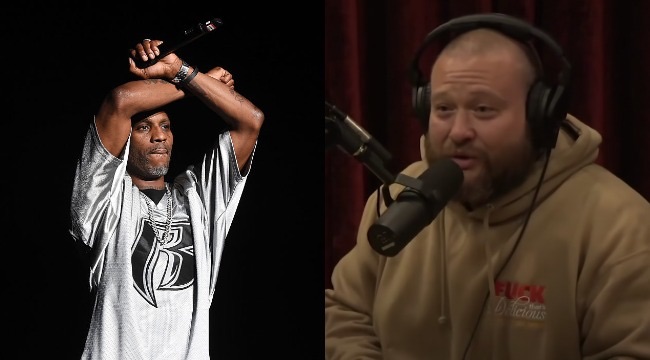 It’s been just under two weeks since we lost DMX and we’re still hearing amazing stories about the guy and his life and this one sort of comes under that bracket.

Action Bronson was appearing on Joe Rogan’s podcast yesterday when he spoke about how his wife had recently given birth during the pandemic and how she listened to 17 hours of Peruvian flute music to try and get the little critter out of the womb. Unfortunately, the baby wasn’t having it though – until DMX decided to intervene:

That motherfucker jumped out of her! I swear on everything, it’s on camera. It’s on film, as soon as the Peruvian flute music stopped, DMX came on, he heard the [barking] and he jumped out.

Yeah I don’t think we actually need to see that footage Action Bronson – I think we can all just believe that it went down like that and you don’t ever need to release it. Great story about DMX and his influence from beyond the grave though. Gone but never forgotten. X gonna give it to ya.

For more of the same, check out all these fans sharing random stories of when they ran into DMX. They’re all completely awesome.