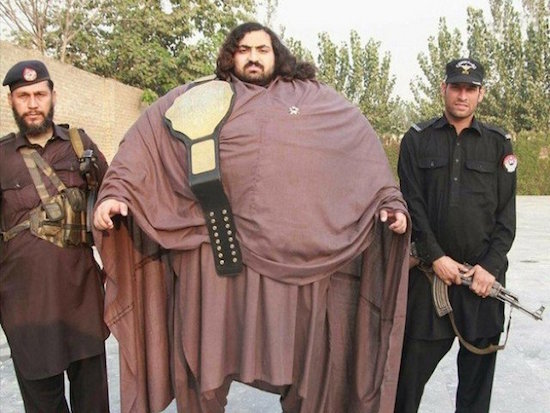 Holding back cars with his bare hands.

I can understand why people would want to be strong, but I’ve never really got why people want to get so big that they end up looking like the guy you can see above me.

His name is Arbab Khizer, he’s 25 years old and he’s claiming that he’s the strongest man in Pakistan. He decided to become so big because he dreams of becoming a power lifting champion.

In order to maintain and grow his massive frame, Khizer eats 10,000 calories a day, including 36 eggs for breakfast, 5 litres of milk and 3kg of meat. That’s probably more than I eat in a week.

You can watch Kizer in action in the video below. He demonstrates his strength by holding back moving cars with just his bare hands:

Pretty strong huh? I suppose that is pretty impressive, but I just wouldn’t want to weigh 960 pounds and be that humongous, even if it meant I could hold back a car.

Still, fair play to the guy for being dedicated enough to his goals by giving it his all and putting everything into it. Hope he manages to win that powerlifting championship or whatever it is he’s trying to master.

For more insanely strong dudes, watch this guy pick up a car with his bare hands and move it. Beefy.