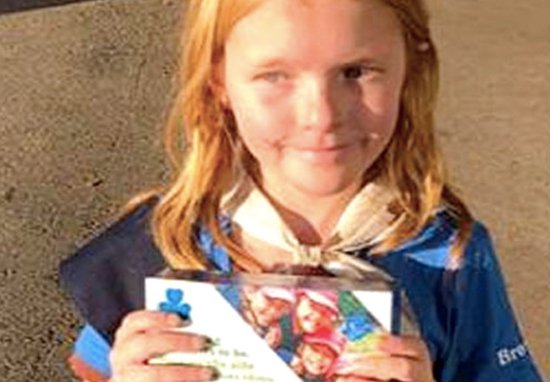 If I was a nine year old girl scout – horrible image in my head there – I don’t think I’d be smart enough to know that stoners love eating food at that point in my life, so I’ve gotta give props to Elina Childs, from Edmonton, Canada who sold out of all of her cookies after just 45 minutes setting up shop outside a marijuana dispensary the day of legalisation. That’s some real smarts right there, especially if her parents or older brother etc didn’t give her the idea as well.

Elina’s dad explained how she came up with the idea:

Last year it took her two weeks to sell all the cookies and she got bit by a dog. It wasn’t bad but we were still apprehensive.

While driving, we saw how long the lines were at the dispensary, and we just stopped to sell the cookies there.

She didn’t quite understand what the big deal was.

She was just selling cookies in her mind, but everyone was so happy to see her, and kept congratulating her.

OK so yeah, my hunch was correct in that she didn’t have a clue what she was doing but I suppose it’s still pretty smart to hone in on where the big lines are. Gotta respect that because it makes perfect sense. Maybe some of the twats on this year’s Apprentice could learn a few things from her.

For more of the same, check out these chocolate chip cookie milk shots. Way better than they sound.