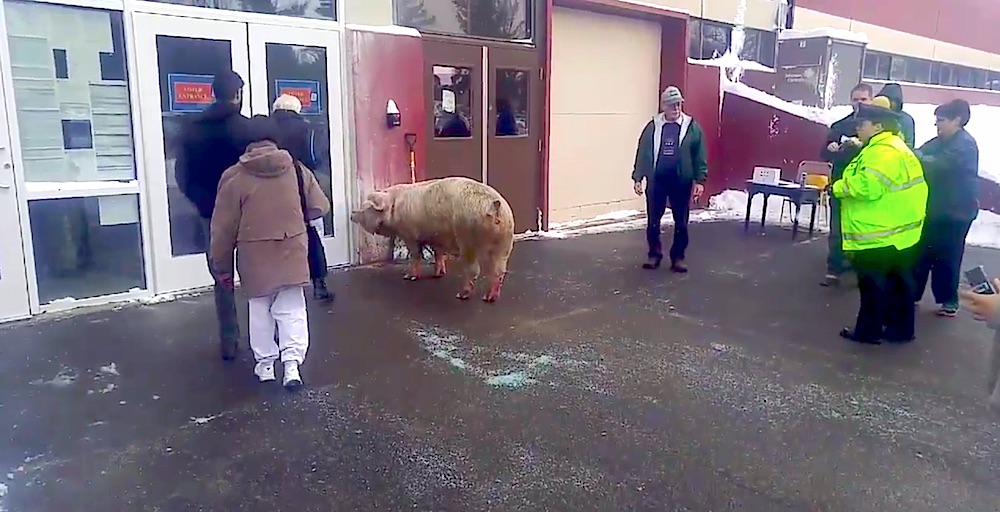 Power to the pigs.

It was the day of the New Hampshire Presidential Primary yesterday, which is kind of like a popularity contest and doesn’t really have too much of an indication on who gets the party nomination. It’s probably most notable for being the backdrop to the first series of 24 really.

However, one pig decided to make it a little bit more interesting. Yes, I’m talking about an actual massive 600 pound pig, who decided to escape from its farm somehow and come and try and come down and cast his vote. We’re guessing he was probably behind Bernie Sanders.

The pig wandered around outside the polling station and was captured in a couple of tweets by a guy called matthewr1960, although he has him pegged as a Trump supporter. I suppose it depends on how you look at the definition of a pig:

Another trump supporter heads for the polls in New Hampshire. #Pelham pig pic.twitter.com/uk0bltyRpR

Police used to deny Trump supporter the vote in New Hampshire today. Swine escorted away from the polls.#outrage pic.twitter.com/6LXmOpji3v

The pig was eventually identified as belonging to a local farmer, who came down to pick him up once he was taken into police custody. It’s thought that he was actually unable to register his vote for the primary.

In any case, Bernie and Donald both won the primary for their respective parties by landslides so it doesn’t really matter that he wasn’t allowed to vote as it probably wouldn’t have affected the result if he was gunning for one of those two.

Whilst it’s kinda funny that this pig turned up to the primary and tried to make his oink heard, it’s actually pretty terrifying that Donald Trump is getting so popular over there and might actually get the Republican nomination, especially when his policies and beliefs are so all over the place. If you need any evidence of this, check out the video below: